When Hollywood Was Inspired By Bollywood Films

Did you Know?   When Hollywood Was Inspired By Bollywood Films

When Hollywood Was Inspired By Bollywood Films

Bollywood films and movie-makers have always kept a keen eye on Hollywood films for drawing inspiration for their movies. However, Hollywood too has picked up ideas, scenes, and storylines of Indian films into their films. Here's a list of 10 films which found its 'inspiration' from Bollywood films.
Jul 11, 2018, 1:51 pm ISTDid you Know?JhakaasMovies Staff

Here are all the times Hollywood officially and unofficially seemed to take inspiration from good old Bollywood.

Starring Oscar Award winner Ben Kingsley and Ben Cross, A Common Man was an official remake of Neeraj Pandey's A Wednesday! Director Rutnam re-worked the screenplay of this highly suspenseful thriller. A Common Man was so successful that it ended up winning awards like Best Picture, Best Director and Best Actor awards at the Madrid International Film Festival. 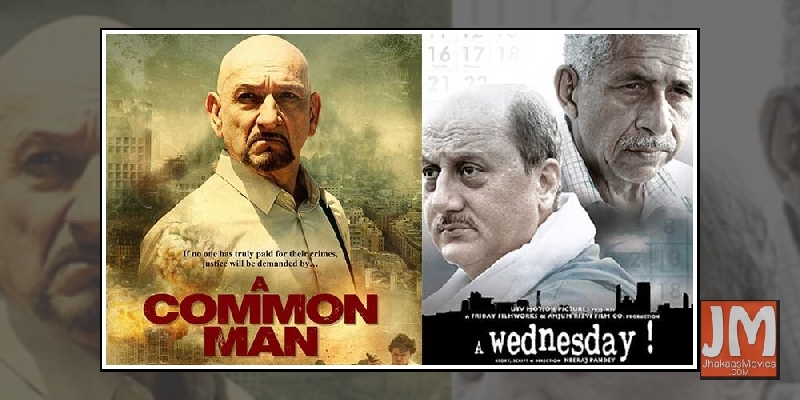 While Chhoti Si Baat was about a shy man who wanted to make a strong connection with a woman he liked, Hitch too was hugely 'inspired'. Will Smith's character was very similar and he took the help of two men to confess his love. 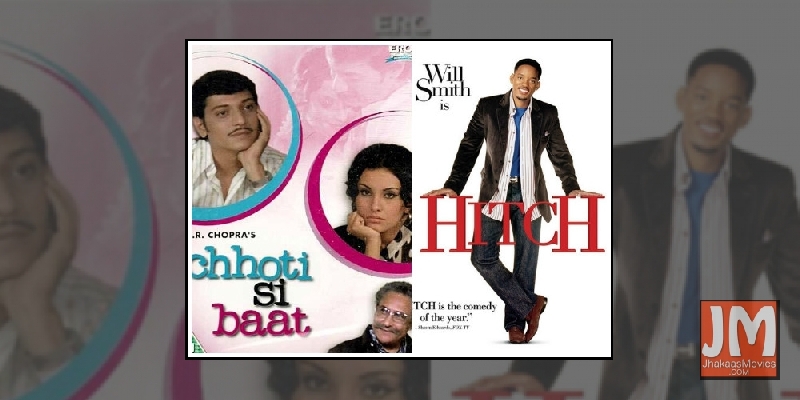 The Love Triangle Drama in a war-torn backdrop shown in ‘Pearl Harbor’ (2001) was largely inspired from Raj Kapoor's classic Sangam. Even though Pearl Harbor had a name which had a significant historical context, the story was not at all about the incident of Pearl Harbor. Audience criticized it because it was about a love triangle and not the incident.

Leap Year by Anand Tucker had Matthew Goode and Amy Adams in lead roles. JWM was about a girl who goes out of the way to meet her boyfriend but ends up meets a guy who helps her complete the trip but eventually ends up "making a connection" with him. Leap Year had a similar storyline. Imtiaz Ali was more than happy about it and added, "I have heard that Leap Year takes inspiration from my film. I am happy and don't want to get into things such as copyright or plagiarism. It feels good to know that Hollywood films can also take elements from us." Definitely, a proud thing to be happy about, Mr. Ali! 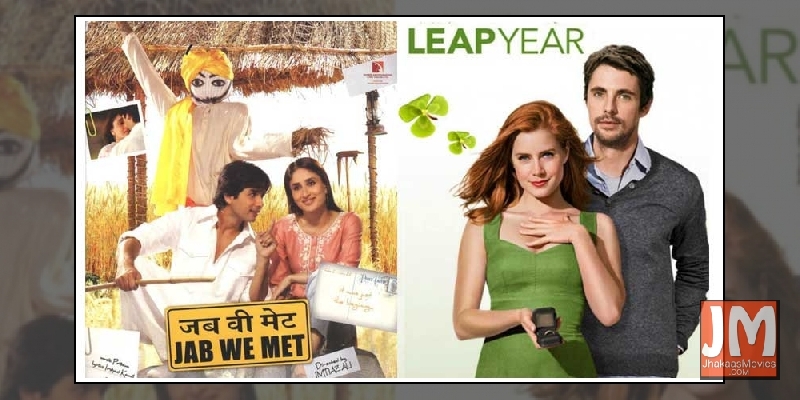 Shahrukh Khan's Darr was a story of a crazy stalker who wanted to win the girl he loved. This 'violent' love story inspired the Hollywood film Fear. Even though storyline differs, a lot of scenes from Fear are similar to that of Darr. In Darr, SRK carves 'Kirran's name (The girl he was madly in love with) on his chest and in Fear too there is an exact scene! 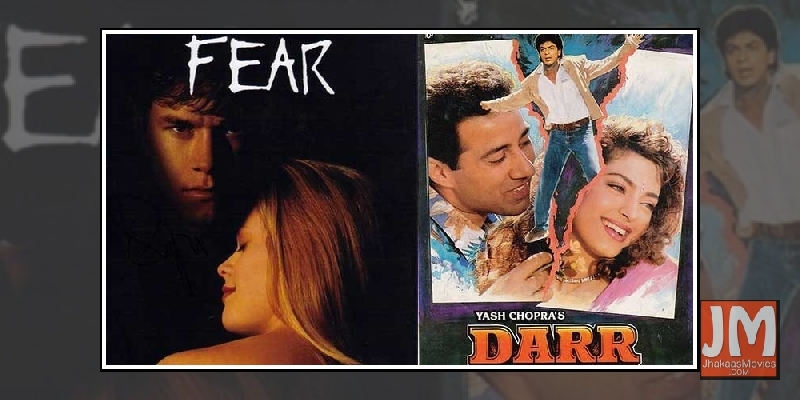 Shoojit Sircar's Vicky Donor was about a man who started donating and selling off his sperms for money. Vince Vaughn's Delivery Man too took an idea and reconstructed it into a new story for the film, Delivery man!. Going by facts both films were a copy from French-Canadian film Starbuck (2011). 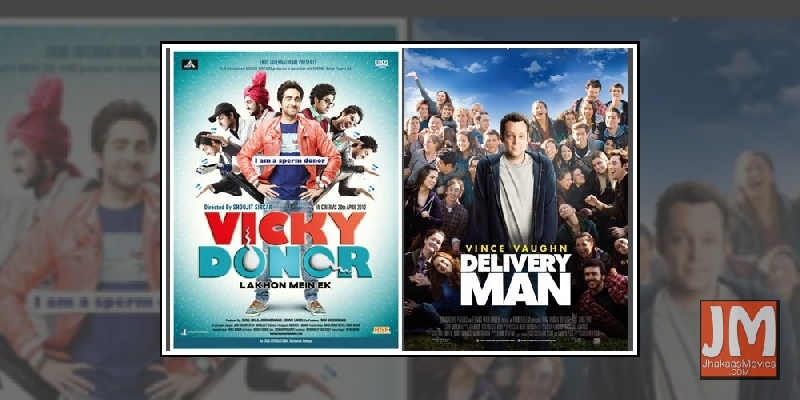 Ram Gopal Varma's cult classic Rangeela starring Urmila Matondkar, Aamir Khan, and Jackie Shroff was about a 'tapori' guy who loves a girl and is highly eager to confess his feelings to her. However, the girl is a struggler and is desperately trying her luck in films. She gets attracted to her co-star, who starts liking her back. Hollywood's Win A Date With Tad Hamilton had a similar storyline, the only exception being that the girl ends up winning a date with Tad Hamilton. 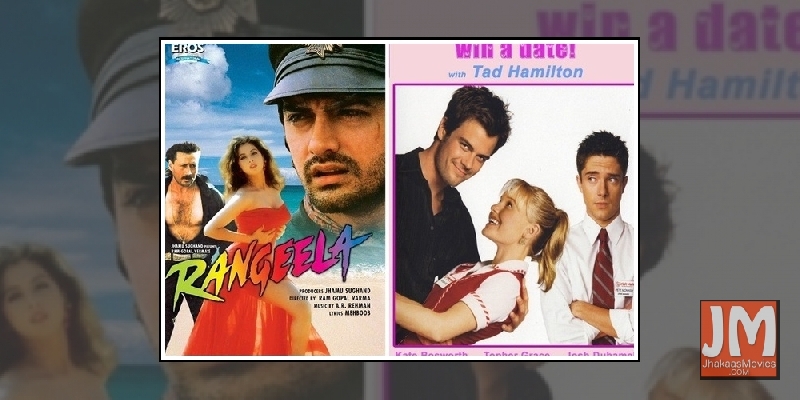 Quentin Tarantino himself admitted while having a private conversation with Anurag Kashyap that the infamous animation-action sequence in Kill Bill was inspired from Kamal Haasan starrer, Abhay. Anurag Kashyap also later admitted in media that, "Yes, Sight and Sound critic Naman Ramchandran first told me this. So when I met Quentin in Venice I asked him whether the Manga sequence in Kill Bill was inspired from an Indian film and he excitedly remarked, 'Yes, I saw this Indian serial-killer film which showed violence as animated.' 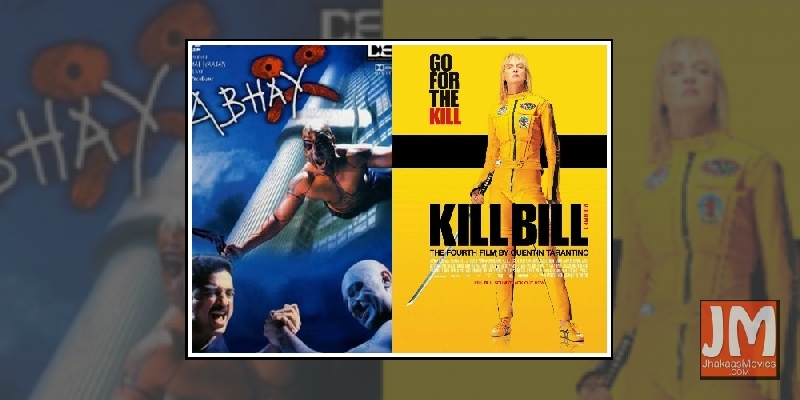 A romantic comedy Just Go With it resembled the Salman Khan, Katrina Kaif and Sushmita Sen's Maine Pyaar Kyun Kiya a lot!  The storyline being the lead actor convincing his girlfriend that he is married but then he ends up asking his secretary to act like his wife temporarily. So basically, Jennifer Aniston=Sushmita Sen & Adam Sandler=Salman Khan.  Both films were inspired by the 1969 American comedy Cactus Flower. 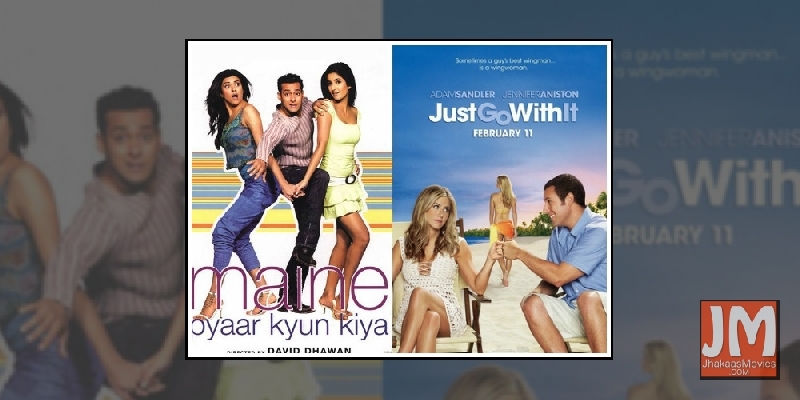 Do Ankhen Barah Haath was a Bollywood movie which was produced and directed by  V. Shantaram. The film revolved around 12 jail convicts who are transformed into good citizens. The film was released in 1957. However just after a decade, in 1967 film director Robert Aldrich made a film The Dirty Dozen which had a similar storyline. The film too portrayed 12 convicts who were trained into military men. 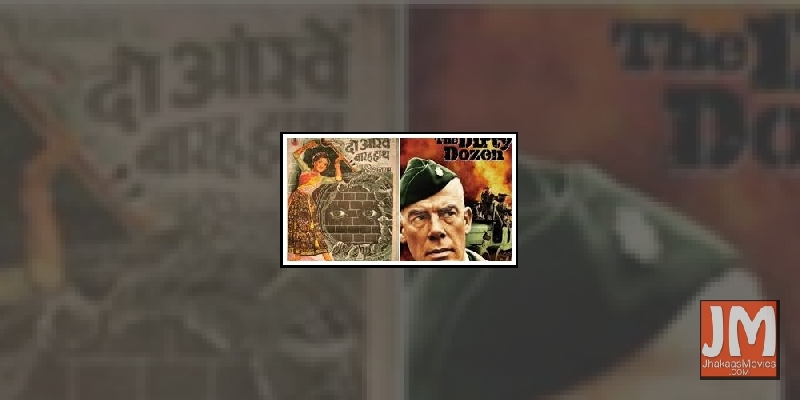