She was born on August 1, 1932 as Mahjabeen Bano. On her birthday, we bring you the heartbreaking story of 'The Tragedy Queen of Indian Cinema' - Meena Kumari. Read more...
Mar 15, 2017, 8:34 pm ISTNostalgiaJhakaasMovies Staff

Meena Kumari was born in Meetawala Chawl in Dadar East locality of Bombay (British India). She was born in a Sunni Muslim family. Her father moved from Bhera (Now in Sargodha District of Punjab Province in Pakistan). Her mother Iqbal Beghum was a Bengali Christian who converted to Islam. Her father was a struggler in Bollywood but never got a major break, though he performed in Theater, played harmonium, taught music and also wrote Urdu poetry. He also played small roles in films like "Idd Ka Chand" and composed music for films like "Shahi Lutere". Meena Kumari's grandmother, Hem Sundari Thakur (Tagore) was the daughter of the Rabindranath Tagore's younger brother.  Meena Kumari (Mahjabeen Bano) never wanted to become an actress. On her father's request, she started her career as a child artist at the age of 6.  She worked for Vijay Bhatt Productions' Leatherface (1939), Pooja (1940), Nai Roshni (1941), Bahen (1941), Kasauti (1941) and Garib (1942). Mahjabeen Bani was rechristened as Baby Meena on the sets of Ek Hi Bhool in 1940. 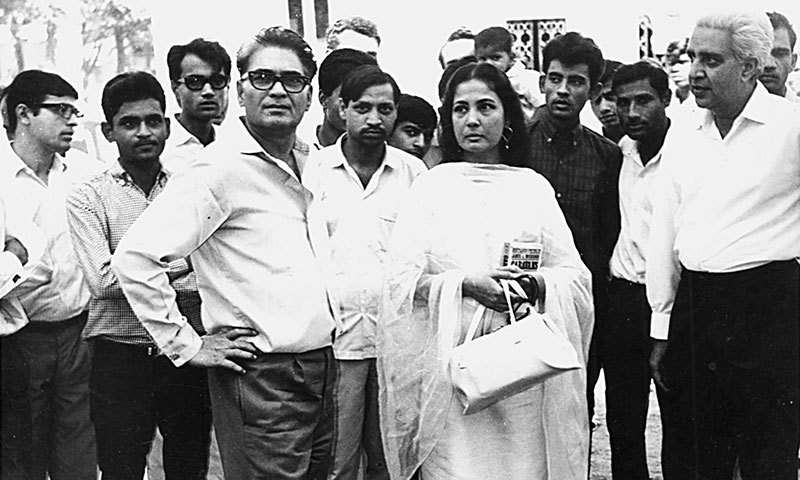 When Kamal Amrohi planned the movie 'Daera' in 1953, he wanted to cast Meena Kumari in it, but Meena Kumari's father didn't allow her to work with Kamal Amrohi. He instead asked Meena to work with Mehboob Khan in the film Amar. Meena Kumari reluctantly agreed, but after 5 days of shooting with Mehboob Khan, she walked out of the movie after instigating a disagreement with Mehboob Khan. The next day she told her father that she had decided to work with Kamal Amrohi in Daera and that she was off to Bombay Talkies to shoot for Daera. Her father warned that if she went in that direction the doors of his house would be permanently shut for her. Meera Kumari was adamant and she went to Bombay Talkies to shoot for her husband's movie titled Daera. Post shooting when she returned to her father's house, her father refused to open the door. Meena Kumari turned her car and left for Kamal Amrohi's house in Sion, Bombay. The couple started their married life in 1953.

Meena Kumari's Claim to Fame and her 1st Filmfare Award:

Meena Kumari shot to fame after her role as Gauri opposite Bharat Bhushan in Vijay Bhatt's Baiju Bawra (Bollywood director Vikram Bhatt is the grandson of Vijay Bhatt). Baiju Bawra was released in 1952. Meena Kumari received her first Filmfare Award for the film. The category for Best Actress was introduced by the Filmfare Awards Committee for the first time that year.

In the late 1950s and early 1960s, Meena Kumari essayed roles in films that mirrored her own unhappy life, after separation (never formally divorced) from husband Kamal Amrohi. The conviction and strength of the characters she portrayed in many of her films earned her the title of "The Tragedy Queen of Indian Cinema'.

It is said that Kamal Amrohi was a very possessive and oppressive husband. Most of his lavish productions like Daira and Pakeezah as also his Kamalistan Studios were financed by Meena Kumari. Meena Kumari wanted a child, but Kamal Amrohi didn't. Meena wanted to become a mother but her dream was never fulfilled by her husband who refused to have a child with her. Kamal Amrohi  already had a son with his first marriage. Kumari raised Kamal Amrohi’s son, Tajdaar, who was greatly attached to her.

On 5 March 1964, on the mahurat of the film Pinjre ke Panchi, Kamal Amrohi's assistant, Baqar Ali had an altercation with actress Meena Kumari when she insisted on letting the budding lyricist 'Gulzar' into her make up room. It was reported that Baqar even slapped Meena Kumari in front of everyone. Baqar used to spy on Meena Kumari on Kamal Amrohi's request. After that incident, Meena Kumari told Baqar to inform her husband that she would not be returning to his house ever and she did keep her words. She never returned to Kamal Amrohi's house. The same night, she moved to in actor Mehmood’s house for a while. Mehmood was married to her sister, Mahalekha (Madhu). She later moved to Janaki Kutir residence in Juhu, Bombay. It is said that Kamal Amrohi had rushed to Mehmood’s house to reconcile their differences and escort her back but Meena Kumari refused.

Released on 4 February 1972, Pakeezah was directed by Kamal Amrohi. The music of Pakeezah was composed by Ghulam Mohammed and Naushad Ali. Meena Kumari played Tawaif (Courtesan) Sahibjaan. Pakeezah was highly acclaimed. Pakeezah made news during the Filmfare Awards in 1972 when Bollywood actor Pran refused to accept his award for Be-Imaan because he felt that Ghulam Mohammed deserved a posthumous Filmfare award for his songs in Pakeezah.

Post her separation, Meena Kumari was under severe depression. Heavy drinking had badly damaged her liver. Three weeks after the release of Pakeezah, Meena Kumari became seriously ill, on 28 March 1972 she was admitted to St Elizabeth's Nursing Home. She passed away on Friday 31 March 1972 of liver cirrhosis at age 39.  At her death, she was in a bad financial situation. It is said that when she died in a nursing home, there was no money to pay her hospital bills. She was buried at Rahematabad Qabristan located at Narialwadi, Mazgaon, Mumbai.

Kamal Amrohi recalled Meena Kumari’s last words before she went into a coma at the nursing home on the evening of 29 March 1972. Meena Kumari said “Chandan, I will not live much longer now. My last wish is to die in your arms.”

Meena Kumari wished this epitaph to be on her grave:

Tanha Chand (Lonely Moon) a collection of Meena Kumari poems, was compiled by Gulzar and published after her death in 1972.

(Why do you want to listen to my story: Colorless tales of a joyless life)

No list of Meena Kumari's popular songs would be complete without this song from Dil Apna Aur Preet Parai. Directed by Kishore Sahu and produced by Kamal Amrohi, this Bollywood movie was released in 1960. It was romantic drama featuring Raaj Kumar, Meena Kumari and Nadira in lead roles. Shankar Jaikishan composed the music for this movie and the Hawaiian-themed song "Ajeeb Dastan Hai Yeh" sung by India's Nightangle Lata Mangeshkar was a huge hit. At the 1961 Filmfare Awards, Dil Apna Aur Preet Parai created an upset by beating popular musical epic, Mughal-e-Azam of Naushad for the Best Music Director category.