Decoding What Went Wrong With Thugs of Hindostan

News   Decoding What Went Wrong With Thugs of Hindostan

Decoding What Went Wrong With Thugs of Hindostan

Thugs of Hindostan had a mega Diwali release this year. On its first day, the movie set a new box office record for highest ever first-day collection. Despite this massive collection figure the film getting bad reviews not just from critics but from moviegoers and it has impacted its collections.
Nov 14, 2018, 12:38 pm ISTNewsJhakaasMovies Staff

The movie opened to a mammoth total of Rs 52.25 crore across three languages. The Aamir Khan-Amitabh Bachchan starrer smashed the earlier record held by Salman Khan's Prem Ratan Dhan Paayo which amassed Rs 40 crores on its first-day collection. Salman's movie was also a Diwali release. Another movie that got Rs 40 crore opening on first day of its release was Baahubali 2: The Conclusion's Hindi version.

But the film saw a close to 50% dip on its second day and could only earn Rs 29.25 crore. This took the film's total collection to Rs 81.50 crore, a good, great number but the despite this massive collection figure the film getting bad reviews not just from critics but from moviegoers and even a layman, and it has started to impact its business as well.

#ThugsOfHindostan has to show a positive upturn on Day 3 [today], else its sustainability from Day 5 [Mon] onwards will be extremely doubtful... One thing is crystal clear: #TOH has NOT met the monumental expectations... The BO numbers are doing the talking now.

Thugs of Hindostan marked the coming together of two of the biggest superstars Bollywood has ever seen. Amitabh Bachchan defined superstardom and was monumental in single-handedly changing the course of Indian cinema in the 70s and 80s. Looking at what went wrong for this Yash Raj film.

Acting, or lack of it: The script gives both of them enough screen time, at the cost of other characters but they fail to make the most of it. Khan’s Firangi and Bachchan’s Khudabaksh looks like the character straight from bad revenge saga from the 70s. Bachchan shows sparks here and there, but he looks like a sad version of his younger self from the last century. Audiences are unable to see the fierceness that was the hallmark of his “angry-young-man” avatar. Aamir’s Firangi is just busy with an (over) act that never moves beyond childish dialogue-delivery feast. Firangi comes across as a Kohl-eyed manic which exhausts the audience with some naive dialogues. A chemistry, like the one we saw with Shah Rukh and Bachchan in Karan Johar’s Kabhi Khushi Kabhi Gham, between the two megastars is also missing. Film’s female characters are Katrina Kaif and Fatima Sana Shaikh have little to do. While Shaikh does have some gritty action sequences and Katrina excels in her dance numbers, they have too little to do when it comes to ‘acting’, Khan remains the highlight throughout. Khan and Bachchan’s expressions are overburdened by elaborately made-up faces. The film never recovers from this shock.

Copied… oops, Inspired: Thugs of Hindostan looks highly inspired by Hollywood’s Pirates of the Caribbean series. The movie is set against the backdrop of early days of the British rule in India. Khan plays a character of a con named Firangi which looks borrowed from Johnny Depp’s Jack Jack Sparrow in Pirates of the Caribbean series. A two-faced man, a trickster who is kohl-eyed, wears a nose pin and has ear piercing and betrays other characters when least expected. He has dual personality and uses others for personal motives. These idiosyncrasies look more sparrowish than Firangi’s. Khan does try hard to be comical but lacks the much needed subtlety and charm that Depp portrayed in Pirates series. Firangi is nowhere close to Jack, No.
Some viewers have even pointed to similarities between fatima’s character Zafira and Elf Legolas from Lord of the Rings and Hobbit trilogy by Peter Jackson. It had similar braids, was a proficient archer had pouty lips and was a great acrobate. The final sequence on the two fighting ships also looks similar to the third Pirate movie. 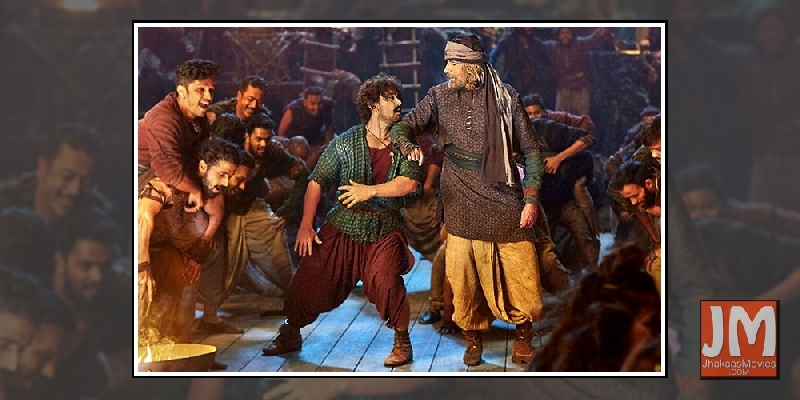 Basic Errors: During promotions, the film went on a marketing spree and created quite a storm. The film has a huge and awe-inspiring canvas but misses a basic ingredient – a coherent plot. Film’s screenplay was undercooked storyline had many loopholes and editing was not good to say the least. Vijaya Krishna Acharya is known for his action packed-direction, there is a certain pace that we see in his Dhoom series. But that was missing in here. Dialogues are largely forgettable.
Storytelling on celluloid is a craft but it looks compromised to fit in the demands of a big-budget production and director has tried to fit in borrowed themes like visual appeal and action sequences in the narrative. The emotional intensity of characters which is needed to establish a connect with the audience has gone missing under the weight sumptuous wardrobe and VFX shots. Film’s soundtrack by Ajay-Atul and the background score is also not noteworthy.

Overall, the film is high on budget and less on entertainment quotient.