Did you Know?   Blockbuster Bollywood Films That Ran For The Longest Time In Cinema Halls

Timeless classics movies which are so close to our heart that we have seen them a number of times and are yet not tired! Here is a list of films that enjoyed the longest run in theatres in the history of Bollywood, just because we bear an undying love for them in our hearts!
Oct 31, 2018, 10:15 am ISTDid you Know?JhakaasMovies Staff

Gone are the days when Bollywood films used to run in cinema halls for months. In the last couple of years, the whole business model on which the Hindi film industry functions has undergone a sea change and the number of days a movie is shown in cinemas have also reduced considerably. Today, the first three days (weekend) are crucial for any film to make or break at the box-office.

The generation, which has seen films drawing the audience to theaters for months and years, fondly reminisces about the good old times. So, here we bring for them and all movie buffs a list of top ten Bollywood films that ran for the longest time in Cinema halls and became timeless classics. Have a look!

10. Mohabbatein (1 Year): Aditya Chopra decided to call the shots once again after the earth-shattering success of his directorial debut ‘Dilwale Dulhaniya Le Jayenge’ (1995), a cinematic masterpiece ‘Mohabbatein’ came into existence. Released in 2000, the film reinstated the fact that Aditya had all the potential to take his father Yash Chopra’s legacy forward as his second outing as a director turned out to be one of the most successful movies of that year. Toplined by the two biggest megastars of the Indian cinema – Amitabh Bachchan and Shah Rukh Khan – along with a host of newcomers like Jimmy Shergill, Jugal Hansraj, Uday Chopra, Shamita Shetty, Kim Sharma and Preeti Jhangiani, the film shattered several box-office records at the ticket window. Made on a moderate budget of Rs. 19 crore, the film ran for 50 weeks consecutively and went on to pull in Rs. 70.62 crores from the domestic market. It created waves in international markets also and raked in Rs. 19.39 crores from there, taking its worldwide total to humongous Rs. 90.01 crores. 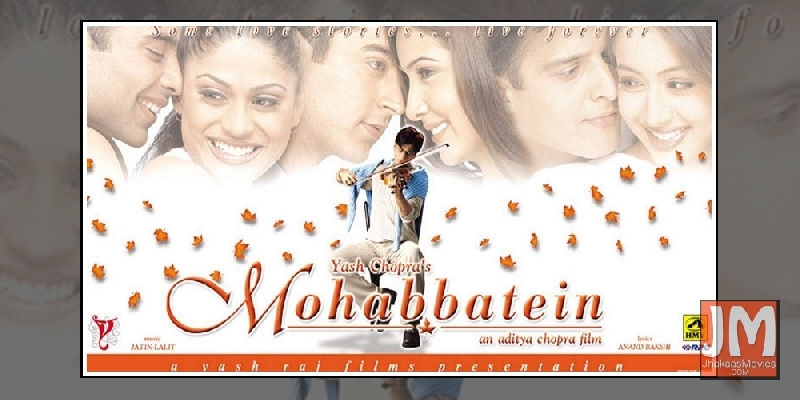 9. Kaho Naa… Pyaar Hai (1 Year): ‘Kaho Na… Pyaar Hai’ hit screens in 2000, it took the box-office by storm. The romantic thriller film had a terrific run at the box-office, running over a year in some screens. At award functions held that year, the film clocked the greatest number of 102 awards and found its place in the Limca Book of Records.Hrithik Roshan became the first and the only actor to have taken home both the best debutant and best actor trophies, for his first film.The movie was made on a budget of Rs. 10 crore, but it did the unthinkable at the box-office. Surprising one and all, the film did a huge business of Rs. 62 crores, staying at the top of the Indian box-office in 2000. The film ran for 50 long weeks in cinema halls. 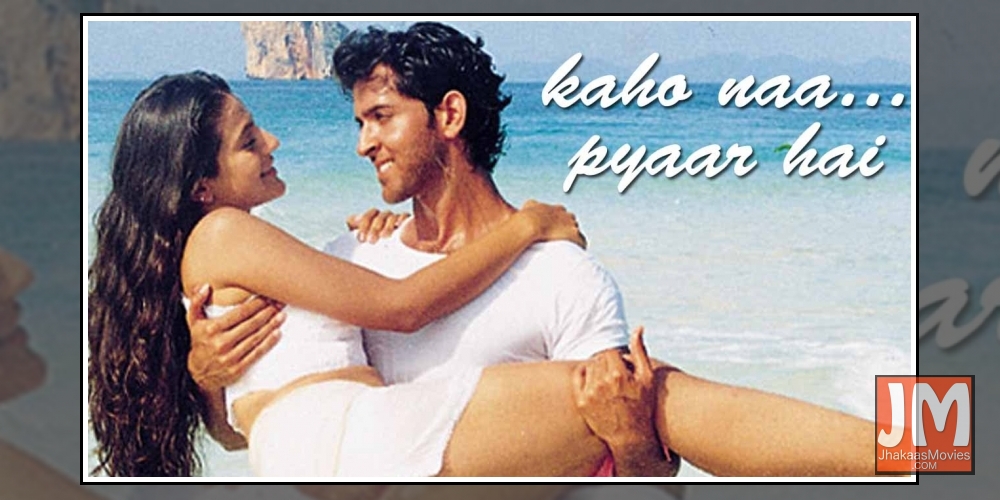 8. Raja Hindustani (1 Year): ‘Raja Hindustani’, a film revolving around the story of an ordinary, poor cab driver developing a torrid love affair with an ultra-rich woman and then facing a string of issues after getting hitched, swept the Indian audience off their feet way back in 1996. The powerfully riveting performances of Aamir Khan and Karisma Kapoor made this film an instant tearjerker as the emotional audience of India could not keep itself away from its charm. The film ran for 50 weeks in theatres. Besides being widely hailed as one of the most romantic films of the 90s, it was also the third most commercially successful Hindi film of that decade. The film collected a staggering amount of Rs. 76.34 crores. Its total budget was just Rs. 5.75 crores.‘Raja Hindustani’ brought Aamir Khan his first Filmfare award for Best Actor, after being nominated for the same consecutively eight times. 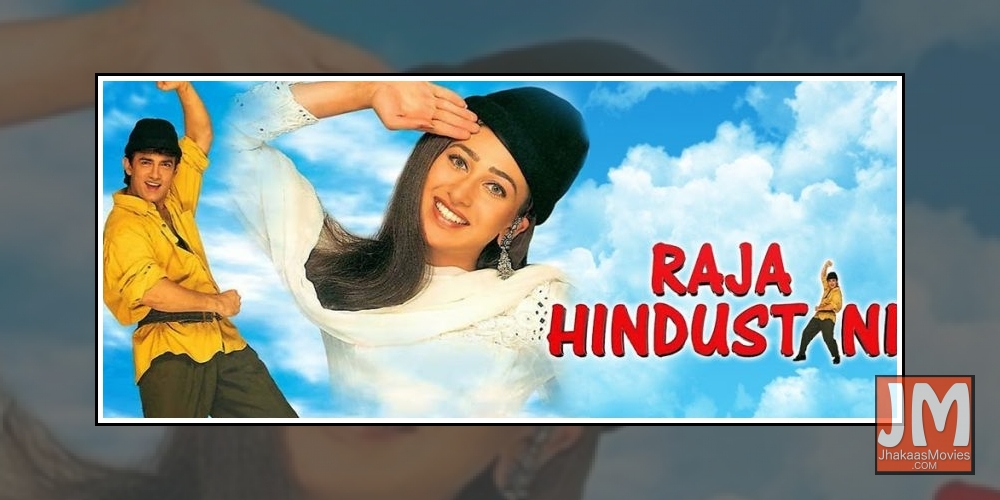 7. Hum Aapke Hain Koun (1 Year): Helmed by Sooraj R. Barjatya under his banner Rajshri Productions and starring Salman Khan opposite dhak-dhak girl, Madhuri Dixit,  ‘Hum Aapke Hain Koun’ made its entry into cinemas in 1994 and wooed the family audience like never before. HANK emerged as the first Hindi film to gross over Rs. 100 crores. Making a moolah of over Rs. 1.35 crores worldwide, the film achieved an unprecedented theatrical glory and became the highest-grossing Bollywood film of all time. The film kept entertaining the audience for almost a year in cinemas. 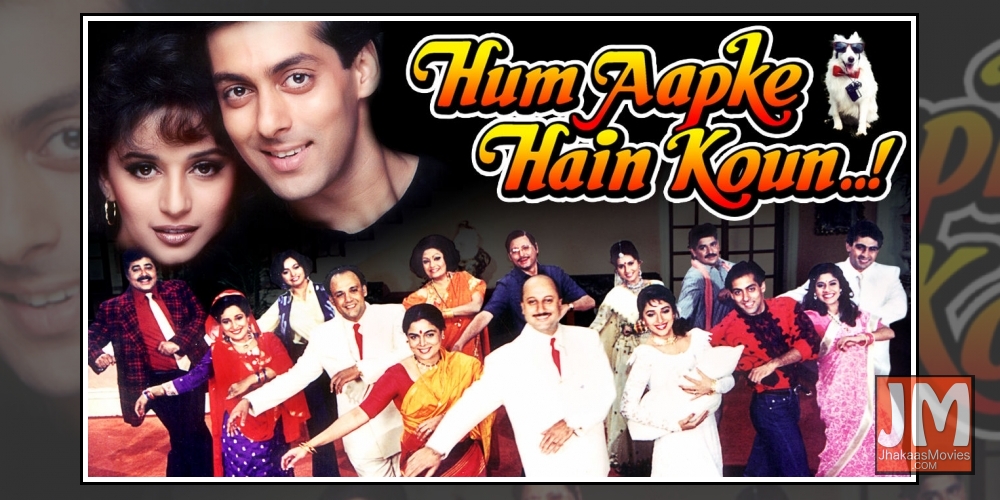 6. Maine Pyaar Kiya (1 Year): It has been more than 27 years since one of the most iconic love stories of Bollywood, ‘Maine Pyaar Kiya’ hit screens, but such has been the magic of the film that it is still remembered by all cinema lovers. Driven by friendship, love and passion of two individuals with diverse background, the film did wonders for the newcomers Salman Khan and Bhagyashree. It made them stars overnight and catapulted them to the highest peak of stardom. It soared at the box-office only to come down after a glorious run of 50 weeks. Made on a budget of Rs. 2 crore, the film netted a massive amount of Rs. 14 crore and became the top-grossing Hindi film of the year. At the 35th Filmfare Awards held in 1990, ‘Maine Pyar Kiya’ claimed seven Filmfare Awards. 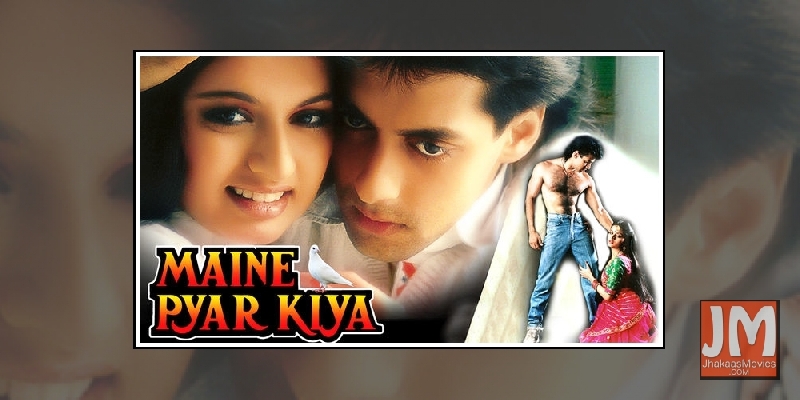 5. Barsaat ( 2 Years): Starring Raj Kapoor and Nargis in principal roles, ‘Barsaat’ was released in 1949. The film has endured several decades since its release, but it still remains as one of the finest pieces of cinema India has ever produced. The film will go down in the history of Indian cinema not just for being one of the Hindi films that ran for the longest time in cinema halls, but also for several other reasons. The stupendous success of ‘Barsaat’ helped Raj Kapoor buy the R K Studios in the year 1950. Powerful story, passionate performances, and mesmeric music score made ‘Barsaat’ a favorite among the audience, which went to cinemas in hoards to watch the film over and again for almost two years. 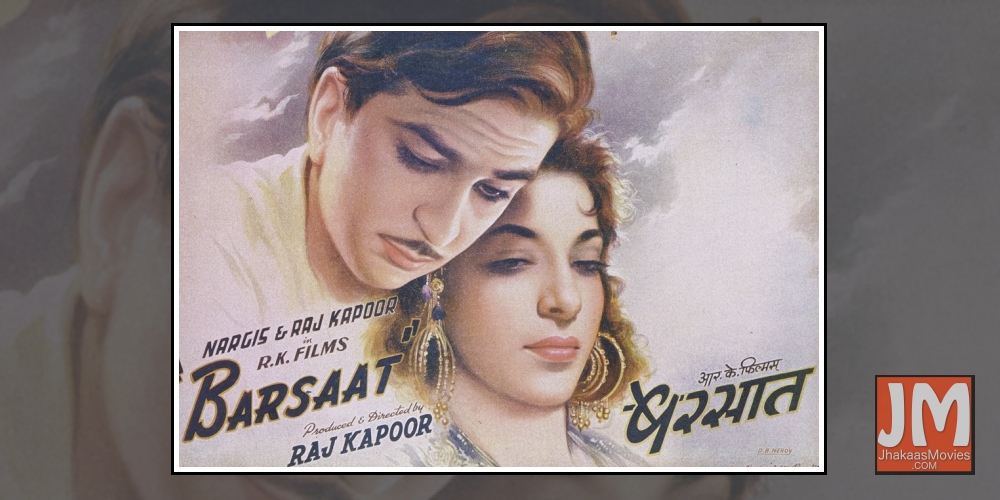 4. Kismet ( 3 Years): Written and directed by filmmaker, Gyan Mukherjee, the 1943 film ‘Kismat’ is known as the first blockbuster of Indian cinema. Toplined by an impressive star cast, which included the likes of Ashok Kumar, Mumtaz Shanti, and Shah Nawaz, the movie found love from all the corners and ran for 3 years in theaters. It is also said to have run a stretch of 187 weeks in the Roxy Cinema in Calcutta, a record which remained unbroken for 32 years!  ‘Kismet’ became the first film to show one of its characters in double role, and a girl getting pregnant before marriage. ‘Kismet’ was also the first ever Bollywood film to use the lost and found formula which was later used in a number of other Hindi films. 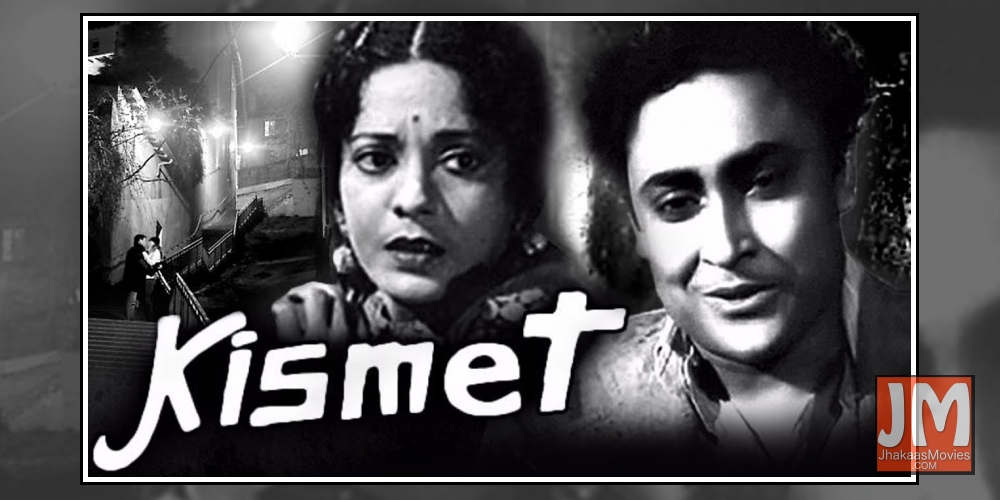 3. Mughal-E-Azam ( 3 Years): The acclaimed costume drama ‘Mughal-E-Azam’ brought to the celluloid the tragic romance between Prince Salim and courtesan Anarkali. Starring two of the most good-looking stars of that generation – Dilip Kumar and Madhubala – the film is known for its opulent sets, extraordinary performances, and outstanding music. It is one of the costliest films ever made in India.‘Mughal-E-Azam’ hit theaters in 1960, it witnessed the widest release for any Hindi film up to that time and, breaking all previous box-office records, turned out to be the highest-grossing Hindi film of all time. It managed to hold this feat for 15 years. It ran for 3 years in cinema halls and took all the prominent awards home. It won one National Film Award and three Filmfare Awards at the 8th Filmfare Awards. Made on a budget of Rs. 1.5 crores, the film garnered around Rs. 5.5 crores. The color version, which hit screens in November 2004, was a commercial success like the original black-and-white version. 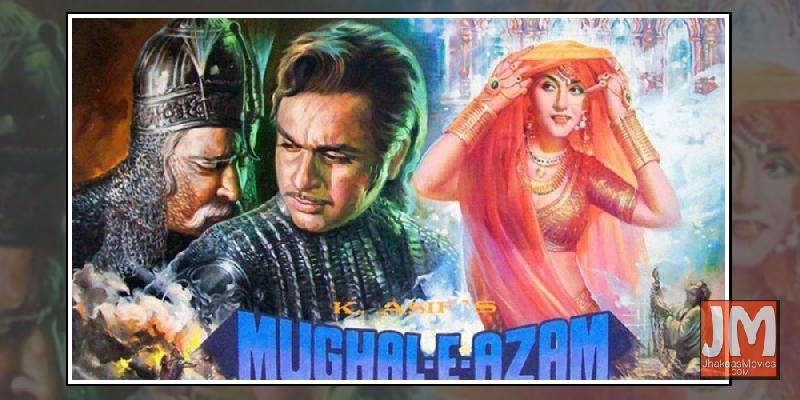 2. Sholay (5 Years): Directed by Ramesh Sippy, ‘Sholay’ was an unexpected hit which went on to become a masterpiece and a reference point for the audience in times to come. The epic film revolutionized the entire Indian cinema. It changed the way films were being made. It changed the way scripts, screenplays and characters were being written. Released on August 15, 1975, ‘Sholay’ ran for five years in cinema halls. The film did magic for everyone associated with it. Be it, actors or writers, suddenly everyone was in huge demand, especially the scriptwriter duo Javed Akhtar and Salim Khan, who became the most-sought, after writers of that time. 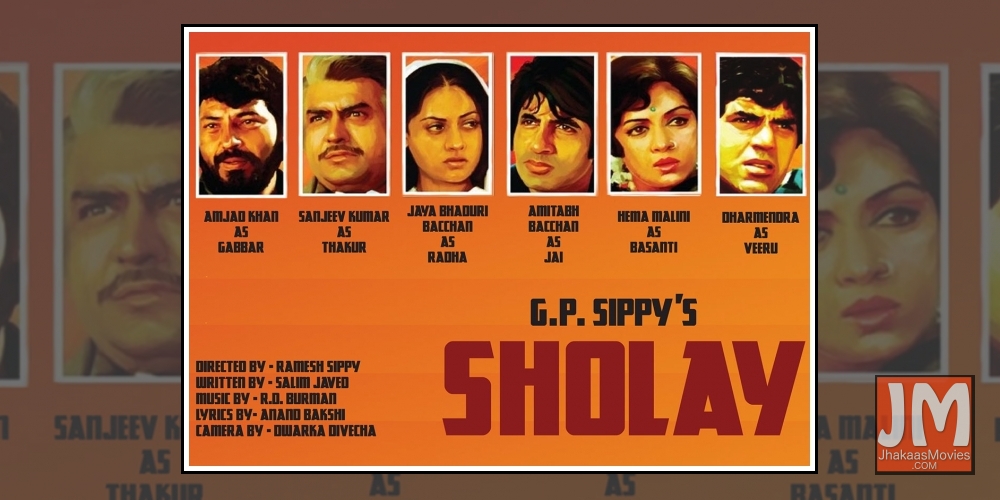 1. Dilwale Dulhania Le Jayenge (21 Years, still running): DDLJ marked the directorial debut of legendary filmmaker Yash Chopra’s eldest son, Aditya Chopra in 1995. With his fresh and engaging script, he breathed a new life in the crumbling romance genre in Hindi films. The story of two young non-resident Indians falling in love on a trip to Europe and then going all out to ensure their love culminates into marriage touched millions of hearts and the film attained an iconic status in no time. The movie has been running at the Maratha Mandir theatre in Mumbai for over 21 long years. Made on a budget of approximately Rs. 4 crore, DDLJ minted Rs. 120 crores in its lifetime run. 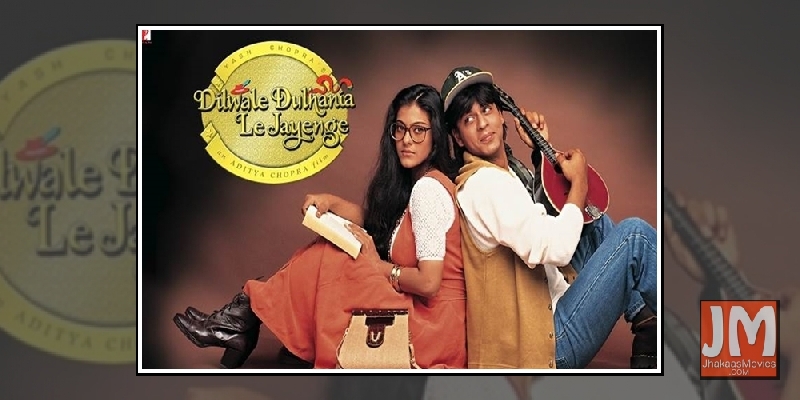