Yamla Pagla Deewana Phir Se Movie Review: Yet another sequel that could have been avoided.

Reviews   Yamla Pagla Deewana Phir Se Movie Review: Yet another sequel that could have been avoided.

Yamla Pagla Deewana Phir Se Movie Review: Yet another sequel that could have been avoided.

The first movie had its moments, however fleeting. The second one tried to mine humour out of an orangutan and wind-breaking Sumo wrestlers. What way could the third installment of Yamla Pagla Deewana go but downwards?
Aug 31, 2018, 10:44 am ISTReviewsJhakaasMovies Staff

The third installment in the Yamla Pagla Deewana franchise starts with introducing an Ayurvedic medicine named as Vajrakawach. World’s top most pharmaceutical companies are trying to decode its formula for their own profit. The brotherly duo Yamla Pagla Deewana i.e Pooran (Sunny Deol) and Kaala (Bobby Deol) hold that traditional formula.

Yamla Pagla Deewana does arrest attention in the beginning when sutradhar Annu Kapoor gives an introduction about Ayurveda medicines and its importance followed by Puran’s introduction. However, things go downhill once Kala is introduced. This is supposed to be a comic caper but throughout the film, there are hardly any scenes that would induce even a mild guffaw. The entire bit on who stole the formula from Puran’s clinic is very predictable. Kala-Chikoo’s love story is nothing special. In the second half, one expects things to get better as the madness shifts to Surat. But even here, there is hardly any scene that would be enjoyed or would touch audiences. The climax is long-drawn and the manner in which Parmar tries to waste time of the court goes on and on and tests the audience’s patience. 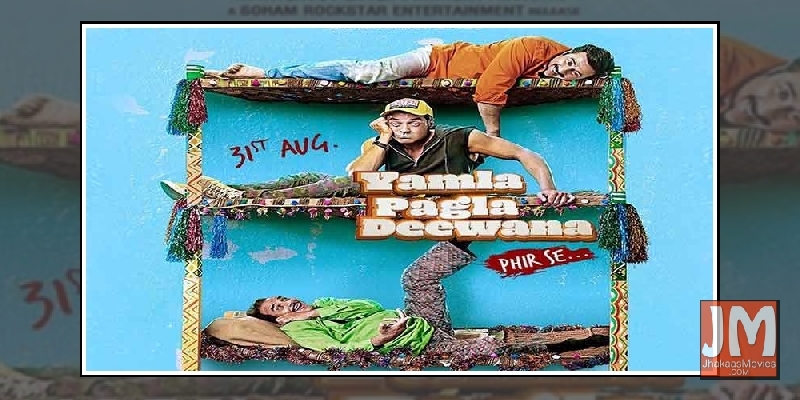 Dharmendra looks his evergreen best but even his charm can't save this nonsensical comedy that did not get a single laugh out of the audience. Sunny takes up his earnest yet action-packed Gadar archetype but now it feels too overrated. Bobby, who just came out of Race 3 and landed in an equally bad third installment franchise film.

The first installment, starring the Dharmendra and his two sons, was a hit. Its sequel released in 2013 but it tanked at the box office. Yamla Pagla Deewana Phir Se is released this Friday.