This incident was narrated by R D Burman in a radio interview on AIR. S.D.Burman, known for his bad temper, was under tremendous pressure. Shailendra, probably too busy with his other assignments, was not delivering a song, urgently needed for the film. Dev Anand and Vijay Anand were frantic. They were pestering Burmanda, who in turn was repeatedly asking Shailendra for the words.

Finally one day, he asked R.D.Burman to go along with Shailendra not to come back home unless the lyrics are given to him. They drove to his home. On the way, they stopped at Shankar  Jaikishan's place to finish some pending work. It was evening, Shailendra finished his work with Shanker Jaikishen and with Pancham, got into his car. He instructed the driver to go to National Park. There, Shailendra kept smoking cigarette after cigarette. BUT NO WORDS !!! Shailendra then thought of a change of place, he asked his driver to proceed to Juhu Beach. R D Burman was cursing his luck as they got back into the car, it was almost night, what will he tell his father about the song. He was 20 years old that time and was an assistant so he couldn't pressurize Shailendra to give him the song immediately.

The time was 11 in the night and nothing is written. The beach was deserted. Those days people used to return home by 7 or 8 in the evening. Shailendra was leisurely strolling along with the eager Pancham trying to keep step. Suddenly Shailendra asked Pancham for a matchbox. He sheepishly handed over his matchbox to Shailendra. Shailendra was lost in thought, he lit his cigarette, returned the matchbox and asked Pancham to give him the tune Burman da had composed. Pancham, tapping the matchbox in rhythm, hummed the tune. It was a full moon night and Shailendra was looking at the sky puffing away on his cigarette and suddenly started writing on a piece of cigarette pack foil. after a while, he told Pancham – “You can go home, tell Dada, I will be at your place in the morning with the full song..” 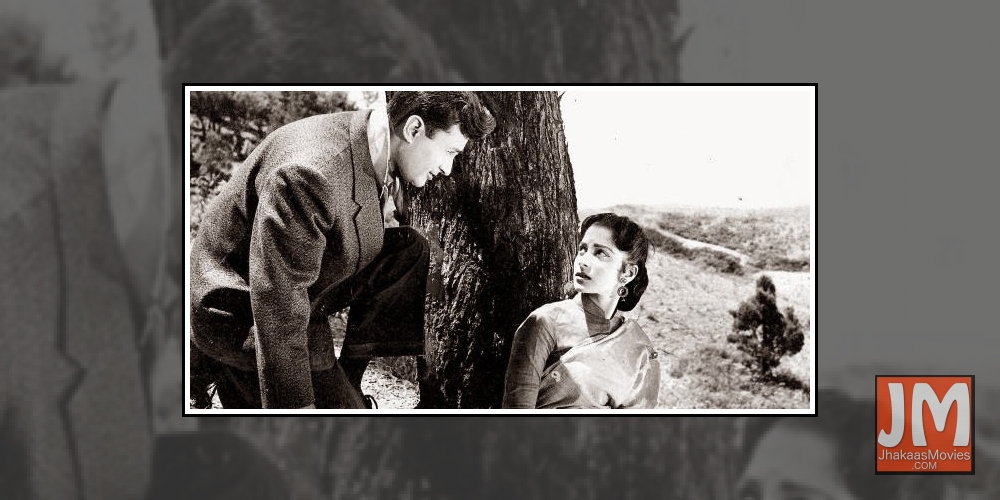 He hummed the mukhda: Khoya khoya chand, khula aasmaan, Aankhon mein saari raat jaayegi, Tum ko bhi kaise neend aayegi. Pancham smiled, he knew that this song was a winner! He ran, hailed a cab and went home. Pancham  in the next morning handed Dada a crumpled piece of cigarette pack foil with the words of the mukhda scribbled on it!!! Burman Da instantly liked the mukhda and asked Pancham to call Shailendra to complete the song.

Vijay Anand choreographs the song very intelligently. Waheeda Rehman seems like the silent moon, sometimes steady, at times just drifting a little. Dev Anand is moving in almost every shot. So is the camera, when he is in frame. The effect is of the vast sky and the unruly clouds moving around the steady, beautiful moon. What Vijay Anand achieves is a feat which is very rare. Watch the nostalgic song here