Pancham Da may have left us years ago, but as his music continues to bring a smile and even makes us cry. On his 79th Birthday lets take down the memory lane and take a look at some interesting, lesser known facts from his life and the musical milestones of his career.
Jun 27, 2018, 9:17 am ISTNostalgiaJhakaasMovies Staff

To the legendary maestro of music #PanchamDa, the man who gave us timeless classics! Remembering #RDBurman on his birth anniversary! pic.twitter.com/jg78Gppknd

Born on 27 June 1939 in Kolkata to music composer and singer Sachin Dev Burman and his wife Meera, Rahul Dev Burman was fondly known as Pancham in the film fraternity. There are various theories about how he got that nickname, which is also the name of the fifth note ‘Pa’ of the major scale in Indian music. A trendsetter by many means, R D Burman was a magician with musical notes. He changed the sound of music by bringing in Latin sounds, cabaret, psychedelic vibes, retro disco and funk sounds. His music was often reffered to as “ahead of its times”, and true to the epithet, his songs are still remembered and sung by the youth; musicians take to remake and remix his songs.

Four decades of music, 331 films of singing and composing and RD Burman gave us tunes which are loved by fans across all generations. Son of renowned music composer, SD Burman...Rahul began his music training right from the very beginning. But without being influenced by his father's inclination towards classical music, Pancham da invented his own style. He created fresh tunes out of combinations of rock and disco with classical beats and sometimes even tunes inspired from Western dance numbers. He played with sounds and could create music with cups and saucers, beer bottles and even rubbing a comb against hard surfaces...percussionists who have worked with him still have numerous memories to share.

On the occasion of maverick musician RD Burman's 78th birth anniversary, we bring to you few interesting, lesser known facts from his life : 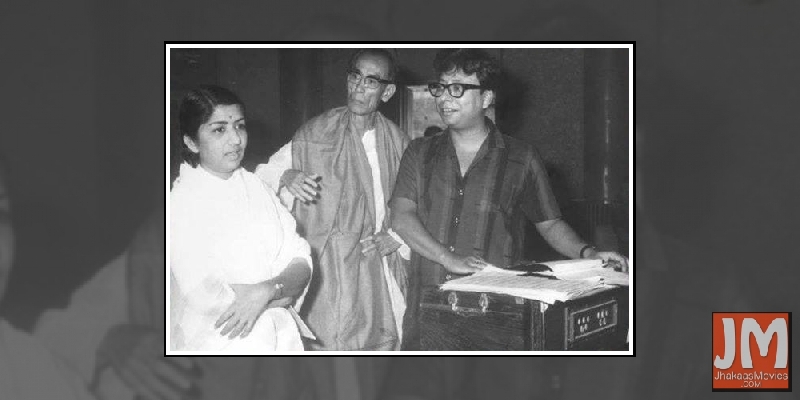 2. First hit album: After assisting his father for many years, RD Burman found success as a solo music composer for the first time in Nasir Hussain's Teesri Manzil. The filmmaker continued working with RD Burman for the next two decades and the film was also the start of Asha Bhonsle and Burman's alliance, the two even got married later on.

3. The man behind Rajesh Khanna's hit musical career: The first superstar of Bollywood, Rajesh Khanna's boasted of many superhit songs in his career. And RD Burman was one of the prominent music composers behind the successful journey. The trio of Kishore Kumar, Rajesh Khanna and RD Burman worked together in more than 30 films. Reports even suggest that Kora Kagaz Tha Mann Mera (Aradhana) was composed by Pancham, but the credit went to SD Burman. Rahul took over the project when his father had fallen ill while composing music for Shakti Samanth film.

4. RD Burman was a creative genius who worked on creating music day and night. Even when he had fallen in love with Rita Patel and got married to her in 1966, it couldn't last long. The couple got divorced in 1971. In documentary called Pancham Unmixed, his friends talk about how he was madly in love with her, but his obsession for music and crazy long hours of work got between them. While the new bride expected time from her musician husband...RD was at the peak of his career and busy working on many films simultaneously and the divorce seemed inevitable. A heartbroken Pancham composed Musafir Hoon Yaaron for Gulzar's film Parichay then.

5. Pancham's last music album was a hit: When new breed of music composers like Laxmikant Pyarelal and Bappi Lahiri was coming up in Bollywood and many filmmakers started preferring them over Pancham Da, he battled his insecurities and gave a super hit album for Vidhu Vinod Chopra's 1942: A love story. Unfortunately, this album released after he died.

6. Often been credited for revolutionising Bollywood music, Pancham da is the inspiration behind many movies. ‘Jhankaar Beats’ and ‘Dil Vil Pyaar Vyaar’ among others have references from Pancham’s life and musical journey.

7.  Burman experimented with a lot of things which the musicians of his era had not even thought of. In the song Chura Liya, he used the sound of a spoon hitting a glass.

8. R.D. Burman made his acting debut in Mehmood's Bhoot Bangla. He also worked in the movie Pyaar Ka Mausam and gave a hilarious performance as Mr. Popat Lal.

9. Filmfare Awards started the Filmfare R D Burman Award for New Music Talent in his memory, in 1995, just a year after his death. The award is given to upcoming music talents.

10. There are a lot of stories behind his nick-name Pancham. It is said that Burman could cry in five different notes and since, Pancham means five in Bengali, his mother tongue, he was named Pancham.

While every song of Rahul Dev Burman was magical, here are 10 of them that easily classify to be called his evergreen hits :

1. Chura liya hai tumne jo dil ko (Yaadon ki baraat)
A song which shows that even in the the latter stages of Burman’s career, he can still compose songs to be iconic. This Asha Bhosle and Mohammed Rafi duet is sensual, and is perfect even today for an evening of romance.

2. Aanewala pal, jaane wala hai (Gol Maal)
When Kishore Kumar sung Aane Wala Pal, he probably created one of the best songs in the history of Indian music. Soulful and romantic, this song will never get old.

3. Baahon mein chale aao (Anamika)
Another sensual number of the song in Lata Mageshkar’s voice, this song featuring Jaya Bhaduri and Sanjeev Kumar is a seductive masterpiece by Burman.

4. Mere sapno ki raani... (Aaradhna)
Originally, Mohammed Rafi was supposed to have sung all the songs in the film, but the composer, Sachin Dev Burman fell ill. R.D. Burman reportedly ghost-composed this song, and took a chance and gave the song to Kishore Kumar who turned into an overnight sensation along with Rajesh Khanna, and the two became best friends in the industry.

6. Tere bina zindagi mein koi (Aandhi)
Another beautifully sad melody of Burman voiced by the duo of Kishore Kumar and Lata Mangeshkar. This song featuring Shatrugan Sinha and Suchitra Sen became an iconic number instantly and remains to be one even today.

7. O Majhi re (Khushboo)
Burman used 12 strings semi-electric guitar coupled with a twang effect to give an extraordinary sound associated with the music director. He applied the sounds from tabla, essentially an instrument of rhythm, for the purpose of both melody and rhythm.

8. Dum maaro dum (Hare krishna hare ram)
Dum Maaro Dum with its lyrics, tempo, and Burman’s iconic vocals makes it safe to call it one *sexy* song. And perhaps one of the early sexy songs of Bollywood, featuring the youthful Zeenat Amaan voiced by the bold Asha Bhosle.

9. Zindagi Ke Safar Mein Guzar Jaate Hai (Aap Ki Kasam)
Perhaps one of Burman’s best, this song speaks on a beautiful level of life, the past, and memories. Combined with the lyrics by Anand Bakshi, Burman’s song and Kishor Kumar’s voice, makes the song an evergreen favourite.