On the death anniversary of the legendary wrestler-turned-actor Dara Singh, we pay him a tribute with his lesser-known facts and how Dara Singh Defeated The Deadly King Kong And Proved That He Was An Invincible Man Of Iron!
Jul 12, 2018, 12:35 pm ISTNostalgiaJhakaasMovies Staff

One of India's most favourite wrestlers, Dara Singh Randhawa, was born on November 19 in the year 1928. Besides never losing a fight and making India proud in the international wrestling arena, Dara Singh was also popular as a Bollywood actor and a Punjabi film producer. Dara Singh was also the first sportsperson to be nominated in the Rajya Sabha. He served the role from 2003 to 2009. The wrestler passed away on July 12, 2012, in Mumbai.

Hanuman for every Indian kid and an eternal guru for every aspiring wrestler, Singh’s career as a wrestler was just as enticing as his onscreen career. Standing 6’2’’ tall and weighing 130kgs at his career’s peak, he fought 500 bouts and remained undefeated. But there was this one odd fight that established the fact that Dara was invincible in the ring. This was the fight between Dara Singh and Emile ‘The King Kong’ Czaja. 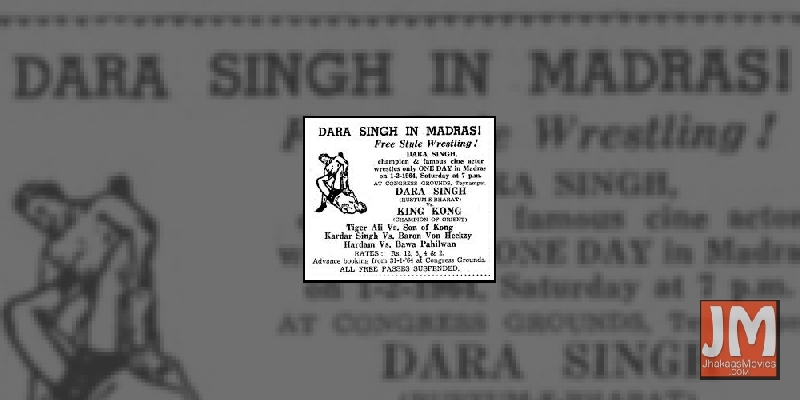 At 6 feet tall, King Kong outweighed Dara Singh by a whopping 73kgs and, needless to say, was feared all over Europe. The stage was set and so were the bets. Winning bets on King Kong outran the bets on Dara but destiny had some other plans. Just when King Kong thought that Dara Singh had given up, the latter picked Kong from his neck and dramatically choke-held him in the air, eventually making him scream for the referee to intervene. Upon the referee’s interference, Dara literally threw Kong out of the ring and claimed the title. The audience was left in awe and admiration of Dara’s strength and skills and he shot to worldwide fame overnight. The fight was so magnificent that it is touted as one of the most incredible fights in the history of wrestling.

With Dara Singh’s demise, ended a generation of pehelwans who were the actual Hercules of the modern world. His prowess in the wrestling ring has immortalized his name in the annals of history