Superhit film Once Upon A Time In Mumbaai marks 8 years of its release today. Film producer Ekta Kapoor is celebrating eight years of her hit movie Once Upon a Time in Mumbaai. Starring Ajay Devgn, Emraan Hashmi, Kangana Ranaut, Prachi Desai and Randeep Hooda, the film was directed by Milan Luthria.
Jul 30, 2018, 2:12 pm ISTNostalgiaJhakaasMovies Staff

Once Upon A Time In Mumbaai

2010 Gangster film, Once Upon a Time in Mumbaai which starred Ajay Devgn, Emraan Hashmi, Kangana Ranaut, Prachi Desai and Randeep Hooda in lead roles, has completed eight years of its release today. The blockbuster entertainer was not only a hit amongst the audience, but it was also a massive box office success. To mark the occasion, the producer of the film Ekta Kapoor took to her Instagram and shared a few famous dialogues from the film. The 43-year-old producer post reminded us of two very popular dialogues, "Bas dua mein yaad rakhna" and "Zaindagi ho to smuggler ki tarah. Saari dungiya rakh ki tarah nick aur khud dhooen ki tarah upar," from the film. While the first dialogue was by Ajay Devgn, the latter was spoken by Emraan Hashmi.

In the movie, Ajay portrayed the character of Sultan Mirza, the infamous Mobster of Mumbai and Emraan played the role of Shoaib Khan, a character that was based on Dawood Ibrahim. Kangana Ranaut and Prachi Desai played their love interest in the film, respectively. Once Upon a Time in Mumbaai was directed by Milan Luthria and was written by Rajat Arora. The film's story was about Sultan Mirza (played by Ajay Devgn) who rises to become the smuggling kingpin of Mumbai in the 1970s, and is in turn challenged by his protege Shoaib (played by Emraan Hashmi). Milan attributes the unprecedented success of the film to its stellar cast. “For the role of Sultan, who was a robinhood-kind of gangster of that era, we just had to take Ajay. Emraan was perfect for the role of the rebellious, trigger-happy Shoaib, while Kangana Ranaut had that Saira Banu porcelain charm to her, who was a famous actor at that time. Prachi Desai, who played the role of Emraan’s girlfriend Mumtaz, was selected because frankly, we didn’t have any actor who agreed to play that part. But after seeing her on a TV show, I was mighty impressed and brought her on-board”, he says. 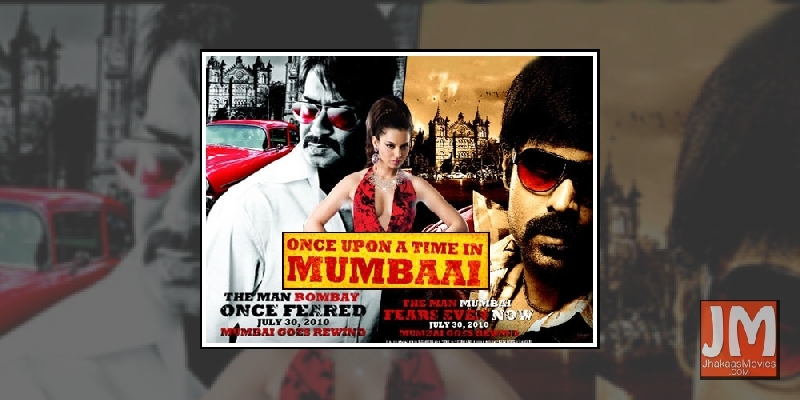 The film depicted the growth of the Mumbai underworld, from crime and smuggling in its early stages to its connection with international terrorism in recent times.