It's been 45 years since actor Amitabh Bachchan's Abhimaan released on July 27, 1973. Abhimaan, which was directed by Hrishikesh Mukherjee , co-starred Mr Bachchan's wife Jaya. The film has a sweetness and sadness. It was a massive success then and the story hasn't lost its poignancy over the years.
Jul 27, 2018, 2:36 pm ISTNostalgiaJhakaasMovies Staff

Abhimaan released in July 1973. It was a massive success then and the story hasn’t lost its poignancy over the years. Because Abhimaan works at many levels – it’s about the fragility of love and marriage, the damage that hubris inflicts, the fleeting nature of fame and the relationship of an artist with his art. Amitabh Bachchan and Jaya Bachchan – the film was released a few weeks after they were married – play Subir and Uma. He is introduced as ‘desh ka sabse bada gayak’. She is a simple girl with a golden voice, which he falls in love with. Subir insists that she sing but when she becomes more famous than him, their marriage crumbles.

Soon enough, Subir reveals himself to be insecure and petty. This isn’t a hero you can root for but Bachchan played him with aplomb.

What made the film more heart-breaking was the vulnerability and grace of Jaya Bachchan, who has never looked lovelier. Uma doesn’t say much but her tragedy resonates through the film.  When she finally breaks down in the climax, viewers were weeping with her. 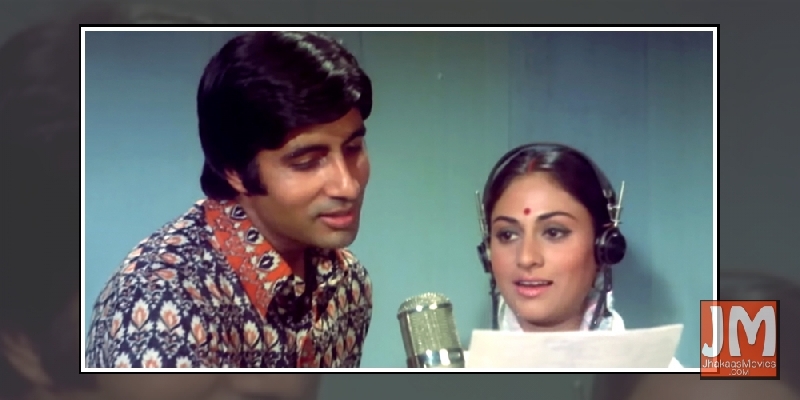 Jaya Bachchan won the Filmfare Best Actress Award for Abhimaan & S.D.Burman won an award for the music composition. The film was also a turning point for Bindu, who, for the first time, played a sympathetic character. Previously, she was known for playing vamps/cabaret dancers, such as in Amitabh's star-making hit Zanjeer (1973).[6] This film was very popular in Sri Lanka more than in India and was screened continuously for 590 days in the same cinema, Empire, Colombo.

And of course, holding together the narrative is S. D. Burman’s landmark soundtrack. Abhimaan is one of the greatest film albums of all time. The songs, written by Majrooh Sultanpuri, are absolute magic. These tunes can never get old. Jukebox of Video Song of the film.