50 Years Of Padosan: Revisiting One Of The Finest Comedies Of Indian Cinema

Nostalgia   50 Years Of Padosan: Revisiting One Of The Finest Comedies Of Indian Cinema

50 Years Of Padosan: Revisiting One Of The Finest Comedies Of Indian Cinema

Padosan is one of the best comedies ever in the history of Hindi cinema. The movie was released in cinema halls on 29 Nov 1968. as the movie completes 50 years, revisiting the masterpiece which set a new benchmark for all the comedies made post the 70's.
Nov 30, 2018, 10:15 am ISTNostalgiaJhakaasMovies Staff

Popularly rated as one of the 10 Best Comedies of Hindi Cinema till date, this is a cult classic famous for its unique comedy, performances, songs and the timeless appeal in its execution. A comedy which actually received its current status after many years of its release in 1968, has been the prime inspiration for all the writers and directors of the present times wishing to make a fine comic project. The film has a tremendous repeat value and is universally loved by all like a perfect entertainer since it never drags or makes you feel bored even after its numerous repeated viewings.

“Padosan”, though the movie is now respected as one of the best products of Hindi Cinema, but reportedly the film was not a huge success at the time of its release in the late sixties. It was produced by Mehmood himself and he had to make another quickie after “Padosan” to keep it rolling which was called “Sadhu Aur Shaitaan” released in the same year. Further as a revelation, “Padosan” was actually Based on Arun Chowdhury’s Bengali story Pasher Bari, a Bengali movie by the same name was directed by Sudhir Mukherjee. It was remade into Telugu in 1960 and Tamil in 1961 before Padosan was made in 1968. Later it was once again remade in Telugu in 1981 and Kannada in 2003. It’s a fast paced, entertaining comedy from start to finish, with all the top comic actors of that golden era having a good time on the screen. 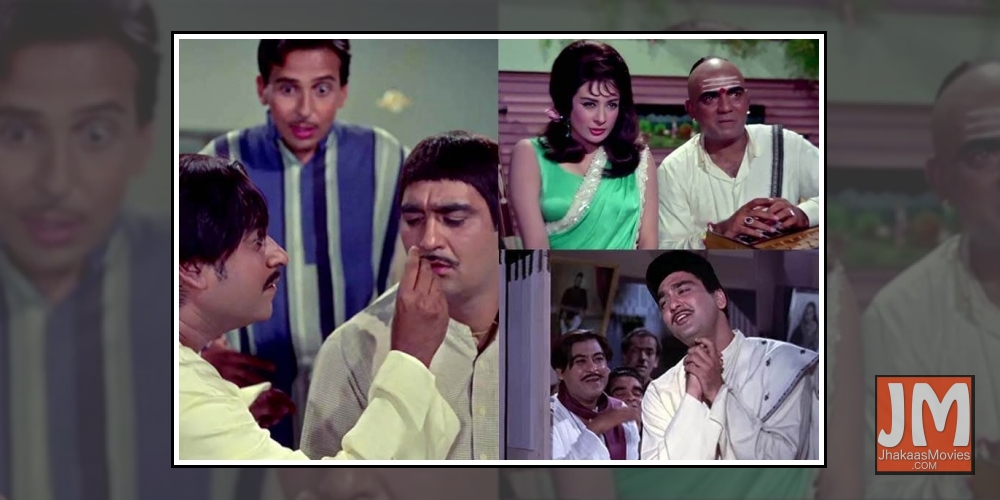 Padosan was produced by Mehmood and NC Sippy and directed by Jyoti Swaroop. It stars Sunil Dutt, Mehmood, Kishore Kumar, and Saira Banu. Urban legend has it that Kishore was disinterested to act and wanted to only sing. However, Mehmood requested him to act as it was his 1st production. Even so, Kishore refused and relented only after Mehmood spend an entire night standing outside his house with his request. Thank God Kishore agreed. His depiction of Vidyapati, singing with pan juice dripping down from his lips is one of the all-time great characters of Hindi cinema

The song Ek Chatoor Naar is one of the highlights of the movie. The song has Kishore Kumar lip syncing for Sunil Dutt while Manna Dey sings for Mehmood. A peculiar situation arose when Manna Dey raised his objection as in the movie, his character loses to Kishore Kumar in a singing duel. He was perplexed as to how he who was a classical maestro, which was acknowledged by even Mohd. Rafi could lose to Kishore who was not classically trained. With great difficulty, Mehmood convinced him.

All the songs of Padosan are popular even today and the movie is one of the all-time great comedy classics of Hindi cinema. It will always be remembered for its songs, Sunil Dutt and Saira Banu pair and for Kishore Kumar and Mehmood who reinforced their status as ultimate talented entertainers.