Sixty One years Of Mother India: A Woman's Struggle And Strength Continues To Be A Cult Film

Did you Know?   Sixty One years Of Mother India: A Woman's Struggle And Strength Continues To Be A Cult Film

Sixty One years Of Mother India: A Woman's Struggle And Strength Continues To Be A Cult Film

The Nargis starrer about a mother caught between her two sons, which went on to spawn so many Bollywood prototypes, was also the first Indian movie to be short-listed for the Oscars.
Oct 25, 2018, 11:13 am ISTDid you Know?JhakaasMovies Staff

Somewhere, the story of a woman's courage has a relevance. A mother bringing up two kids constantly being in turmoil, divided between the good son and the bad son, knowing the bad son is just haywire, he is emotionally more reactive, always wanting to put him on the right path, but eventually realising that she has to make a harsh choice.

Released six decades ago on Oct 25, 1957, Mehboob Khan's tribute to women grossed over Rs.40 million. The record was broken three years later by K Asif's magnum opus 'Mughal-e-Azam'.The actual budget was Rs.2.5 million but it went up by Rs.3.5 million because of the outdoor shoots and payment to the contributors. However, the making of the film didn't take much time. Mehboob Khan started the shooting in 1955 and finished it in early 1957.  The film also ran in America for a few days. It was also released in East Africa and the cut version was showcased in France.

It was a remake of the ambitious director's earlier creation 'Aurat', he paid Rs.35,000 to the National Studio to buy the copyrights of the film, a massive sum in those days. Set in a village, the story revolves around Radha (Nargis), whose husband (Raj Kumar) abandons her and leaves her to bring up their two sons. Radha fights poverty and lecherous moneylenders to raise her children. Finally, at the end of her life, she has to take the ultimate decision, killing her younger son who has kidnapped a girl. The story may be old in time and the village backdrop may not find too many takers today, but Radha's struggle continues to hold resonance.

Nargis, who was only 26 when she was signed for the legendary role that portrayed the struggle of peasants, won the best actress award at the prestigious Karlovy Vary festival in what is now the Czech Republic. The performance continues to inspire actors. Mehboob Khan, who came from a very humble background, remained faithful to his roots. In fact, he shot the climactic fire sequence in Umra, Gujarat, where he was born. His production company's logo, hammer, and sickle, also harked back to his village beginnings.

Finding the right cast was a mammoth task. Though Nargis was his first and the last choice for the main role, identifying the right actors to play her sons was a challenge. Initially, the director wanted to cast Sabu, an Indian actor who was a huge star in Hollywood, as the younger son Birju but it didn't materialise. Dilip Kumar too was very keen to play Birju. But Mehboob Khan finally zeroed on newcomer Sunil Dutt as Birju and Rajinder Kumar as the elder son. Dilip Kumar was very keen to play the role of Birju. In fact, he was ready to play both husband and son. But Dilip Kumar and Nargis could not be cast as mother and son. They had earlier played romantic roles and the public might not have accepted them as mother-son. 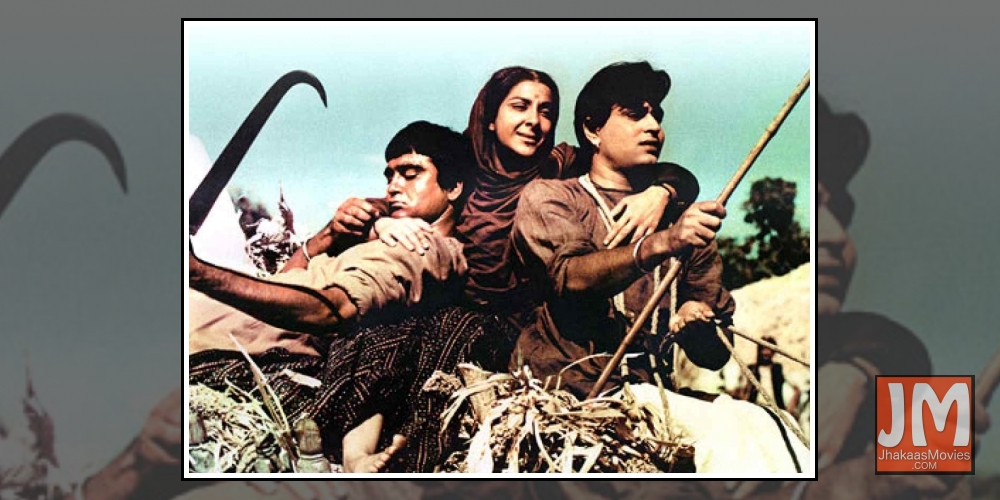 Master Sajid, who played young Birju, was picked from a lorry loaded with poor children. Mehboob Khan took just three minutes to cast Raj Kumar as Nargis' husband. The story of 'Mother India' just won't be complete without the famous fire accident which brought shooting to a temporary halt, and was the beginning of the romance between Nargis and Sunil Dutt, who saved her from the flames. Sunil Dutt got burnt while rescuing Nargis. The actress also got injured and medicines had to brought in from Mumbai to Umra.

After the film, tensions broke out between Mehboob Khan and Nargis because she wanted to marry Sunil Dutt immediately. This marriage could have ruined Mehboob Khan's dream project, with his lead actors playing mother and son in reel life getting married in real. He feared the public would not accept their alliance and reject the movie. Finally, the couple tied the knot on March 11, 1958. Sunil Dutt never went for the premiere.