Did you Know?   Naam 32nd Anniversary: When Sanjay Dutt Played Himself

Naam is regarded as a milestone in the careers of Mahesh Bhatt, Paresh Rawal, and Sanjay Dutt. The movie proved to be a blockbuster at the Box Office, playing for over a year at a majority of India's cinemas and stands as the eighth-highest-grossing Hindi film of the 80's. "Chithi Aayi Hai" sung by Pankaj Udhas was selected as one of the 100 songs by BBC Radio.
Sep 12, 2018, 9:54 am ISTDid you Know?JhakaasMovies Staff

Sanjay Dutt struck gold with his debut film Rocky in 1981. His next success arrived the next year with Subhash Ghai’s Vidhaata. But it was only with his third hit in the form of Mahesh Bhatt’s Naam that inscribed his name as a star to reckon with. Today, as the film completes 32 years of release, it is still considered as of one of the best works of both Dutt and Bhatt.

Playing Vicky Kapoor, the protagonist in Naam would have been challenging for many young actors. It was Bhatt’s unusual tips for Dutt that made sure he pulled off the character with ease. An actor generally has to get into the skin of the character he is required to play. He has to be far away from his real self. However, as surprising as it may sound, Bhatt urged Sanju to play himself in the film. The filmmaker revealed this to Rakesh Anand Bakshi while reading out Dutt’s letter which he wrote from Yerwada Jail.

“Sanju, no! I don’t want you to play all these people you have in your head. Characters you must have read about or seen in other films or in your life. I want you to play you! Just be yourself. I want you to be Sanju. Not the actor Sanjay Dutt,” said Bhatt to the actor during the shooting of the film. Elaborating it, Bhatt continued, “Now, Sanju is saying that I helped him become him. Because he was playing other people, while I told him, ‘No! You play yourself. I don’t want you to act.’ So an actor wants to arrive at what they think is the real face of the character, and they feel that the director will help them reach there. Actually, what actors look for in a director is the hope that he will take them to a hidden treasure, which lies within them.” 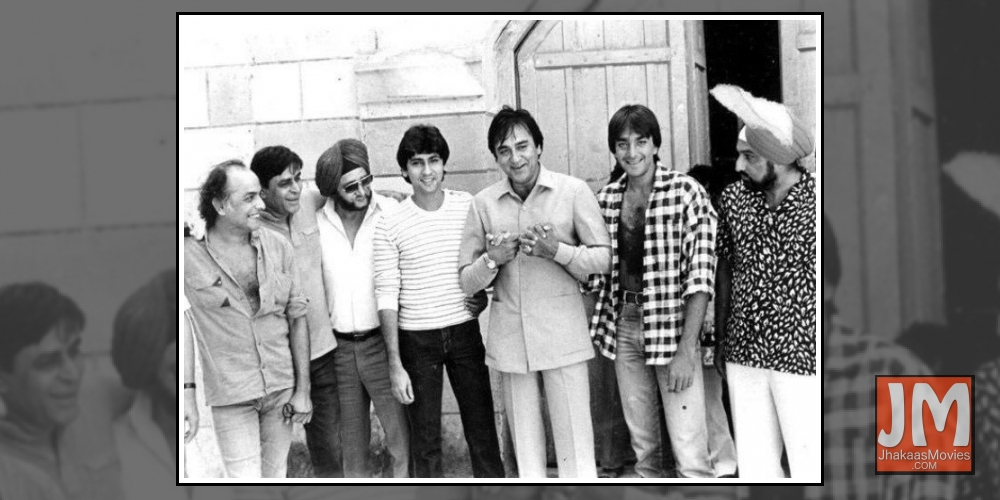 The first film of writer Salim Khan who first wrote independently. Laxmikant-Pyarelal composed the film's background music like the classy music of English film background music. Nutan performed very well. Pankaj Udhas first filmy appearance, Anupam kher dubbed for the actor played Poonam Dhilion"s father, Poonam had replaced Farha in the film. Editor of this film was David Dhawan and this was the 2nd film which Mahesh Bhatt shot in hong kong the 1st was Lahu ke do rang.

Naam also starred Kumar Gaurav, Nutan, Paresh Rawal, and Ashutosh Gowariker. The film is also known for Pankaj Udhas’ track, ‘Chitthi Aai Hai,’ which continues to move people, especially NRIs who have gone abroad to earn their bread and butter. Naam proved a blockbuster at the Indian box office playing for over a year at a majority of India's cinema's and stands as the eighth highest grossing Hindi film of the 1980s decade.