The legend of Kishore Kumar: A Versatile Maverick

Kishore Kumar is synonymous to India's Golden Age of music. Decades after his demise, his tunes continue to haunt the music lovers, who are swayed by the rhythms.Switch any FM station and you are sure to hear one of the many memorable melodies of the Kishore Kumar-RD Burman era.
Jun 19, 2018, 12:50 pm ISTNostalgiaJhakaasMovies Staff

Early Life :
Abhas Kumar Ganguly was born to Kunj Lal Ganguly and Gauri Devi. Youngest among his siblings – Ashok Kumar, Sati Devi and Anup Kumar, his name Abhas was changed to Kishore Kumar on the advice of an astrologer. In the words of Ashok Kumar, "As a child, Kishore's voice was shrill. At the age of ten, came a turning point. Once, when his mother was chopping vegetables, he rushed into the kitchen and hurt his foot resulting in a finger falling apart. Kishore suffered immensely and would cry the whole day and night for a month. It was a blessing in disguise as the constant crying metamorphosed his shrill voice and it became melodious. I myself joined Bombay Talkies as an actor-singer. Whenever I came to Khandwa, he would sing Saigal songs at my request. He charged others four annas but surprisingly he charged me one anna for my songs." Kishore's love for singing affected his studies. After passing his Intermediate, he left for Bombay to meet his hero KL Saigal, but Saigal passed away on January 18, 1947.

Career :
Ashok Kumar set up Filmistan with his brother-in-law Sashdhar Mukherjee and Rai Bahadur Chunni Lal. In 1949, Bombay Talkies announced its film Ziddi starring Dev Anand and Kamini Kaushal. Ashok Kumar introduced his younger brother to Khemchand Prakash, the famous composer who was to compose for Ziddi. He liked Kishore's singing and recorded his solo song, Marne ki duayaien, picturised on Dev Anand in Saigal style.After Ziddi, Kishore struck a fine rapport with Dev Anand and often discussed with him the sequence and mannerism of onscreen performance. But it was truly SD Burman who made Kishore Kumar Dev Anand's voice. SD Burman overheard Kishore singing and impressed by his open-throated voice he signed him for Baazi (1951), Mere labon pe dekho. Later in Munimji (1955), with solo, Jeevan ke safar mein rahi, Kishore proved his mettle.

This guy made madness fashionable :
Kishore was the first Indian comic hero who added a new dimension to comedy. No wonder, Kishore was a great admirer of Charlie Chaplin and Chaim Topol and their impact could be amply seen in his acting. He had worked with all the major directors of his time ranging from Bimal Roy, Hrishikesh Mukherjee, Phani Majumdar, Satyan Bose, Shakti Samantha to HS Ravel, and celebrated several hits. He sang under the baton of Anil Biswas, C Ramchandra, Shankar Jaikishan, OP Nayyar, Madan Mohan, Hemant Kumar, and also worked with next generation composers like Kalyanji Anandji, Laxmikant Pyarelal, RD Burman and Rajesh Roshan.

Kishore also aspired to make films of his own choice.His most memorable Chalti Ka Naam Gaadi became India's cult comedy film with all the three brothers acting together for the first time.Cinema was changing very fast. His demand as an actor was diminishing, so he returned to his first love, singing. So far, Kishore was giving his own playback and for Dev Anand. But with Kala Pani, in 1958, Burman da switched over to Mohammad Rafi as playback for Dev Anand. All the same, Kishore was back in Guide and sang only one duet, Gaata rahe mera dil, with Lata.

The man and his eccentricities :
Perhaps, the burden of being a singer, an actor and an occasional composer, took a heavy toll on him. Kishore was a man given to eccentricities. He married four times and barring his last marriage to Leena Chandravarkar, all of them had their fair share of problems.

Money mattered a lot. Kishore, it is believed, wouldn’t sing or act till he was paid. He would start recording only after his secretary would confirm receiving the payment.

Kishore’s madness knew no bounds. Once, a producer went to court to get a decree that the singer follow the director’s orders. After that he would obey the director to the T. Once while shooting a car sequence he refused to alight from his the vehicle till the director ordered him to do so. After filming a car scene in Mumbai, Kishore drove on till he reached Khandala because the director forgot to say “cut” 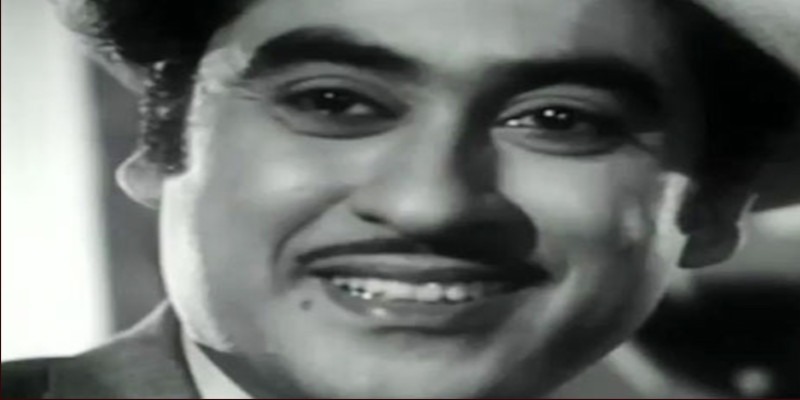 Interesting facts about Kishore Kumar :
It is quite interesting to note that in his forty-year career as an actor-singer, in twenty years he sang nearly 300 songs, and in the next twenty years till his death he sang nearly 2,600 songs.Kishore acted in 102 films, 98 in Hindi and four in Bangla. He produced 14 films under his own banner, directed 12 films, and wrote 15 films but only nine of those were released.The winner of the Filmfare Award eight times over, seven times winner of Bengal Film Journalist Award, honoured by the Lion club fourteen times—in 1979, the EMI in Los Angles also presented Kishore a special Golden Disc for his outstanding contribution to music.