21 years of Gupt: When Kajol crossed over to the dark side

Nostalgia   21 years of Gupt: One Of The Best Suspense Movies Ever Made in Bollywood

21 years of Gupt: One Of The Best Suspense Movies Ever Made in Bollywood

To celebrate the 21 years release of Rajiv Rai's Bobby Deol starrer thriller "GUPT", we look back at some interesting facts which still has audiences talking about the movie. Without a doubt, Gupt was a whodunnit Bollywood is yet to outdo!
Jul 5, 2018, 11:56 am ISTNostalgiaJhakaasMovies Staff

Remember Gupt: The Hidden Truth? That insanely amazing suspense thriller that blew our mind way back in 1997! From Bobby Deol‘s spoilt rich boy act to Manisha Koirala‘s expressions and of course, * 21 year old spoiler alert* Kajol‘s psycho girlfriend act; everything in this movie was perfect!. Directed by Rajiv Rai, the Trimuti Films production Gupt was also a love triangle of sorts. The modern suspense film found Bobby Deol’s character Sahil accused of the murder of his stepfather Jaisingh Sinha, played by Raj Babbar. Sahil’s childhood sweetheart is Isha, played by Kajol, and he wants to marry her, but his stepfather doesn’t take his choices into account and instead announces at a party his marriage with Sheetal (Manisha Koirala). The film's plot progresses in a linear way. There are way too many negative characters introduced to further twist the guessing game. Yet, even with multiple characters, not once do you feel lost in the narrative. 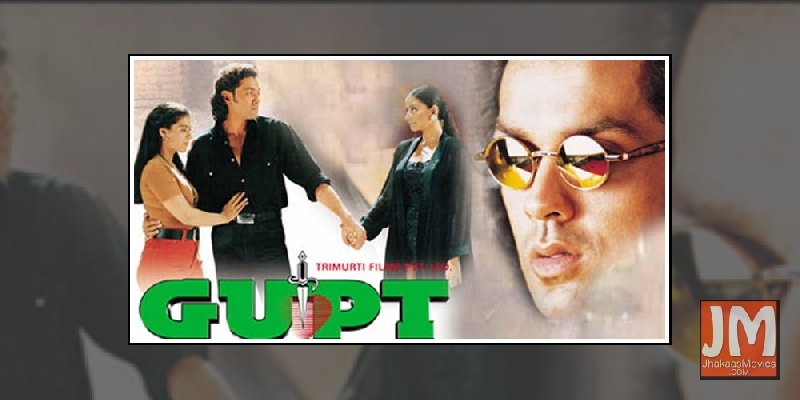 It was definitely stylish and slick for its time and is famous for one of the most shocking plot twists. Kajol definitely deserves extra praise for her character of Isha and is considered one of the best female antagonists in Bollywood. She dared to be different and ended up being the only woman to win the Filmfare trophy for Best Performance in a Villainous Role. She was also the first woman to be nominated in that category. Also, the treatment of ‘Gupt’ is almost like a Hollywood slasher film, making it much more intriguing and mysterious.

Even the music of the film by Viju Shah was out of the box as each track offered something new. Be it the theme song Gupt Gupt, the dance number Duniya Haseena Ka Mela or the romantic numbers Mere Khwabon Mein Tu or Mushkil Bada Yeh Pyaar Hai, the sound of his music was catchy and different.

Gupt was one of those films that keeps you glued till the end and gives out a gratifying climax. Without a doubt, Gupt was a whodunnit Bollywood is yet to outdo!.