Boney was 10 years elder to his first wife 'Mona' and when they were in their 13th year of marriage, Mona figured out that her husband was in love with Sridevi and decided to walk out. Read their complex love story.
Jul 26, 2017, 1:50 pm ISTDid you Know?JhakaasMovies Staff

Boney Kapoor was born as Achal Kapoor on November 11, 1953 in Meerut. His father Surinder Kapoor grew up in Peshawar (now Pakistan) and had moved to Meerut post the Partition of British India. His father later moved to Mumbai to work in Bollywood and Boney joined him once he grew up.

Boney got married to Mona at the age of 29. His was an arranged marriage. She was 10 years younger and literally grew up with Boney Kapoor. They got married in 1983 and their marriage ended in 1996 when Boney and Sridevi's affair came out in public and Sridevi became pregnant with Boney's child. Mona decided to walk out of the marriage as Boney was no longer in love with her and their relationship had ended.

In an interview to DNA, she said that her family was her biggest strength. She stated, "My family including my father, my mother and sister was the greatest support. They told me, ‘Whether you cry, lick your wounds, turn into a recluse or go to the Himalayas, we are with you!’ The humiliation was painful because I was pitted against a heroine. I was made to feel lesser. Industry wives gave me suggestions like, ‘Why don’t you lose weight?’ or ‘Why don’t you join a spa?’ All this made me realise that I had to get up, dust myself and start walking all over again. I told my parents that I wanted to make my own identity. Also the advice that my friend Meena Goculdas’ mother gave me became the gospel truth for me. She said, ‘If somebody has no place in your life, then you can have no place for them in yours.’ This was my aakashwani. I understood that I had not failed – my relationship had!"

Boney fell in love with Sridevi after watching her Tamil Film during the late 70s. He even flew to Madras to meet Sridevi only to find out that she was busy shooting in Singapore. A few years later, Boney watched Sridevi's debut Hindi movie titled Solva Sawan in 1979 and decided to work with her. He once went to meet her on the sets of a movie, but Sridevi being an introvert wouldn't talk to strangers. She did, however, speak with Boney in her tooti-footi Hindi-English and told him that her mother looked after her movie projects. Boney approached Sridevi's mother to sign Sri for Mr. India. 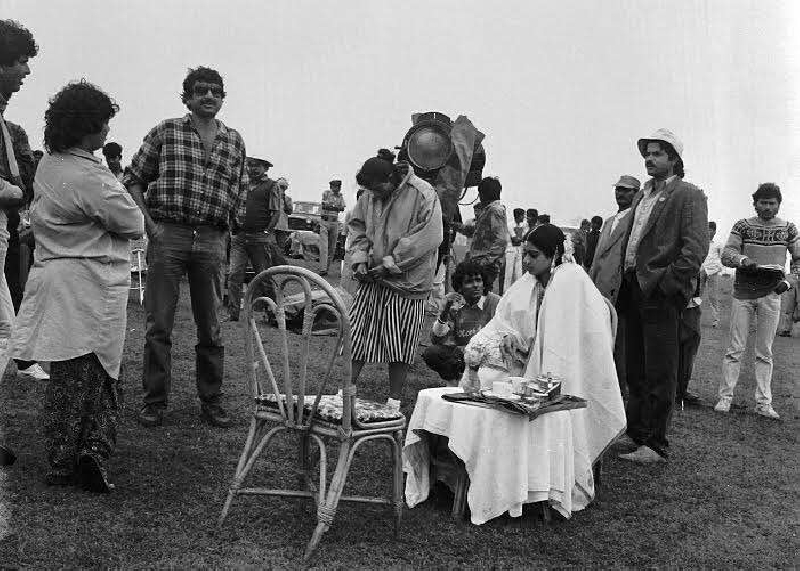 On The Sets Of Mr. India

In an interview, Boney said, "When she asked for Rs 10 lakh, I offered her Rs. 11 lakh because I wanted to be close to Sri. Her mother was impressed. There were no vanity vans at that time but I arranged for a separate make-up room for her. Gradually, she felt comfortable with me"

At that time, Sridevi was rumored to be in love with Mithun Chakraborty. Sridevi and Boney Kapoor's closeness had made Mithun quite jittery and insecure. It was rumoured that he had got secretly married to Sridevi back then. Sridevi wanted him to come out open about their relationship and leave his wife, but Mithun was unwilling to leave his wife and they both ended up slamming all the rumours about their secret marriage. 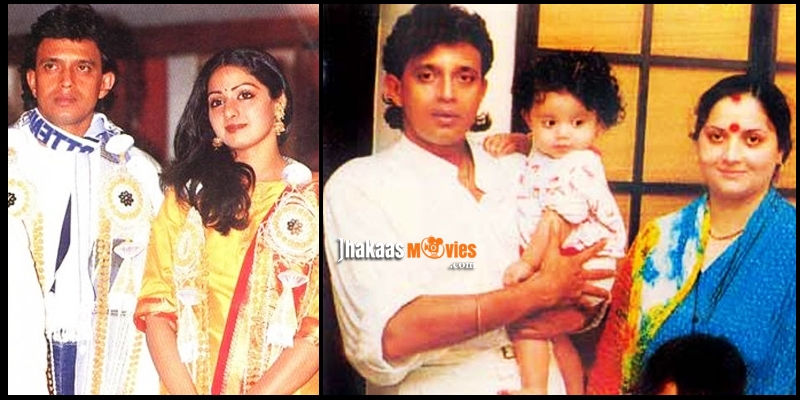 As per the stories published in media that time, Sridevi had become friends with Mona Kapoor and frequented Mona and Boney’s house. Soon Sridevi fell in love with Boney as he took care of Sridevi's parents too.  Sridevi became pregnant with Boney's child and the news spread like fire and Sridevi was accused of being a home-breaker. Mona's 13-year old marriage with Boney was in for a sad ending when she realized that her husband was in love with Sridevi. There was nothing left in their relationship to give it a chance because Bollywood actress Sridevi was already with a child.

Sridevi got married to Boney Kapoor in 1996. According to a controversial story published in Stardust magazine back in 1997, Sridevi was extremely insecure about her marriage.

One of the quotes from that story read:

"It rankles her no end that Mona is still Boney's legally wedded wife, while she herself continues to remain his mistress, a temple wedding notwithstanding."

In the story, there was also a mention of one incident where Boney met his first wife Mona and took his children, Arjun and Anshula out on a picnic. This made Sridevi so angry that she started abusing Boney. A neighbour heard the yelling. Sridevi was shouting:

"She should understand that Boney is quite attached to his kids and that there is nothing wrong if he meets them or takes them out for a picnic. After all, he is their father". 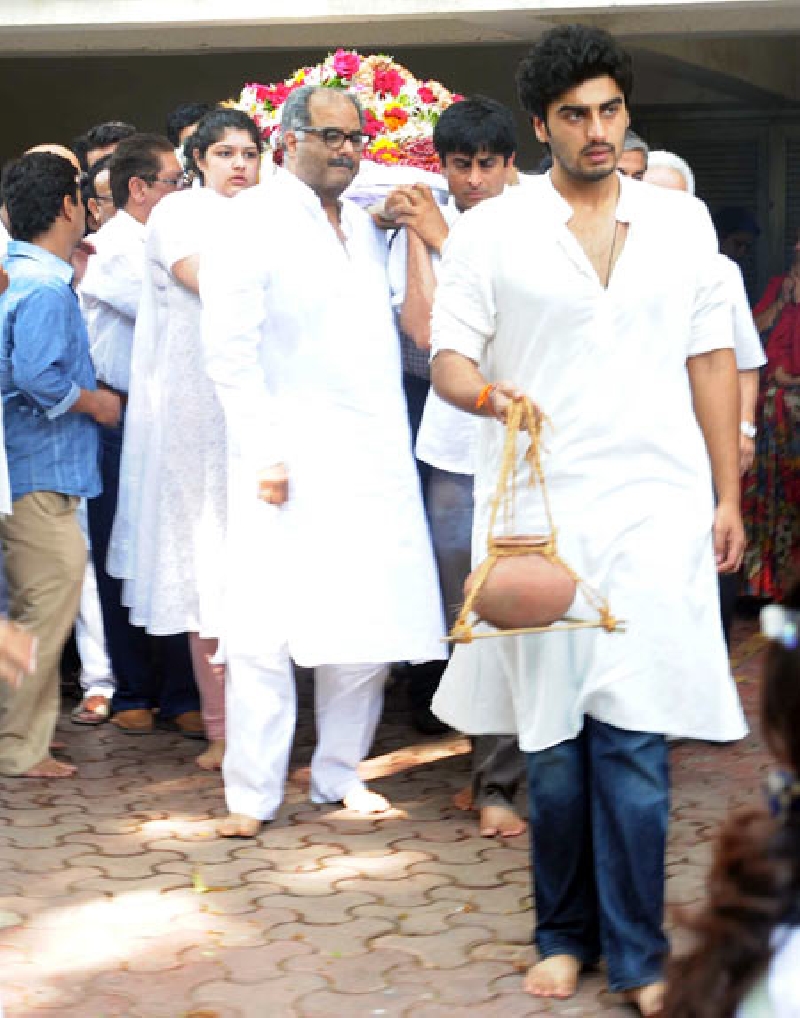 After splitting from Boney Kapoor, Mona continued to live with her in-laws for 10 years. She lived there with her two children until her death on March 25, 2012. She died due to multiple organ failure after battling with cancer and blood pressure on 25 March 2012. Mona Kapoor was the CEO of Future Studios, the largest ready-to-shoot, fully furnished, indoor shooting studio in Mumbai.

Mona's mother, Sattee Shourie, had a public altercation with Sridevi where she verbally and physically abused her. Sattee tried her best to fight the injustice to her daughter but Mona wasn't a party to it as she didn't want to take action against Boney Kapoor. When Sattee Shourie passed away in 2016, the entire Kapoor Khandaan went to pay respect to her where Boney stood by his son Arjun Kapoor and his sister Anshula who were emotionally attached to their maternal grandmother. It was reported that Sridevi didn't take kindly to the Kapoor turnout at the funeral, especially her husband's presence at the funeral and prayer meeting of someone who'd publicly humiliated her.

Post the demise of Boney's ex-wife Mona and his mother-in-law Sattee, Sridevi and Boney Kapoor are living a happily married life and have 2 daughters.