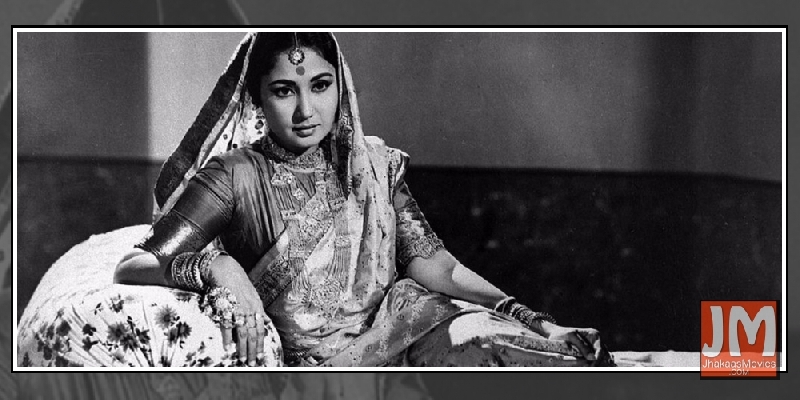 Meena Kumari was born with the name Mahjabeen in a family of poor theatre artists, Ali Bux and Iqbal Begum on 1 August 1933. Mahjabeen said as a child that she was not interested in a film career, and would rather attend school. In spite of this, her parents started peddling four-year-old Mahjabeen to film studios for work opportunities. Director Vijay Bhatt cast her in the film Leatherface and on her first day she was paid Rs. 25. She began acting when she was four. She initially worked mostly in Vijay Bhatt productions; Leatherface (1939), Adhuri Kahani (1939), Pooja (1940) and Ek Hi Bhool (1940). Vijay Bhatt rechristened Mahjabeen as "Baby Meena" during the filming of Ek Hi Bhool (1940).

Meena was cast under the name Meena Kumari in Ramnik Production's Bachchon Ka Khel (1946). Films like Duniya Ek Sarai (1946), Piya Ghar Aaja (1947) and Bichchade Balam (1948) Veer Ghatotkach (1949), either saw her in multi-starrers or in lead roles which unfortunately failed to leave a lasting impact on the audience. Meena Kumari desperately needed a film which would transform her into a sensation among the audience and she soon got one – it was her mentor Vijay Bhatt's musical, Baiju Bawra (1952).

Kamal Amrohi offered Meena Kumari a lead role in his upcoming film Anarkali and the contract was signed on March 13, 1951. On May 21, 1951 Meena Kumari was involved in a motor car accident while returning from Mahabaleshwar to Bombay. Kumari went through bouts of depression, and Kamal Amrohi visited her regularly during her days in the hospital. On 14 February 1952 Meena Kumari, 18, and Kamal Amrohi, 34, secretly got married in a simple "Niqah" ceremony in the presence of a Qadi and Kumari's younger sister, Mahliqa (Madhu). The marriage was kept secret from the family and media, although Kamal Amrohi was already married and had three children from his former wife. After some months, the matrimony news was leaked to Kumari's father.

Three weeks after the release of Pakeezah, Meena Kumari became seriously ill. On 28 March 1972, she was admitted to St Elizabeth's Nursing Home. She went into coma two days later and died shortly afterward on 31 March 1972.She was 38 years old. The cause of her death was determined to be liver cirrhosis.